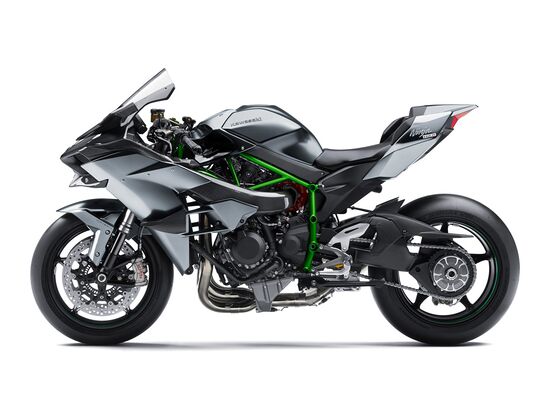 Kawasaki Ninja H2 was announced in 2014, and mass production and official sales began in 2015.

This model was the first mass-produced supercharged sportbike. The frame was not the die-cast aluminum used on modern sportbikes, but a steel lattice frame specially designed and manufactured for the H2 model, making it possible to more efficiently dissipate heat from the engine. For the manufacture of this frame, a special robotic welding machine was used.

In parallel to the civilian version of the Kawasaki Ninja H2, a racing version was also offered - Kawasaki Ninja H2R . It differed in boost settings (maximum power - 310 hp), engine, exhaust system, overall and ergonomic parameters, modified gearbox settings and preparation for use on the race track. This model could not be used on public roads.

Among the features of the Kawasaki Ninja H2 (H2R), in addition to the engine and frame, it is worth highlighting sports adjustable suspensions, a fuel injection system with dual injectors, powerful front brakes with radial monoblock calipers, a 6-speed gearbox and a number of electronic systems:

Since 2018, the H2 line has been replenished with a budget modification - Kawasaki Ninja H2 SX and Kawasaki Ninja H2 SX SE . The SX version was distinguished by cheaper equipment (braking system, rear wheel of reduced width), different settings for the engine, injection system and gearbox, as well as a fuel tank increased to 19 liters. The SX SE-modification was distinguished by additional options (unlike the usual SX):

Kawasaki H2 series models are available in most markets including Europe, North America, Oceania and Asia. In the domestic Japanese market, only racing versions of the H2R and budget H2 SX were available, although other modifications also made their way to Japan through re-import, mainly from Southeast Asian countries.