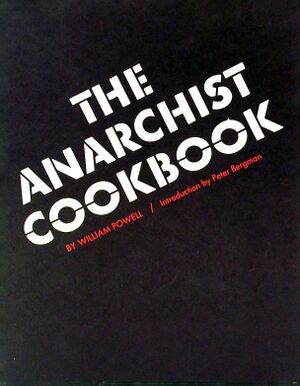 The Anarchist Cookbook, first published in 1971, is a book containing instructions for the manufacture of explosives, rudimentary telecommunications phreaking devices, and related weapons, as well as instructions for the home manufacture of illicit drugs, including LSD. It was written by William Powell at the apex of the counterculture era to protest against United States involvement in the Vietnam War. Powell converted to Anglicanism in 1976 and later attempted to have the book removed from circulation. However, the copyright belonged to the publisher, who continued circulation until the company was acquired in 1991. Its legality has been questioned in several jurisdictions.

Powell stated The Anarchist Cookbook was initially designed as a book meant to provide education towards "the silent majority" of the American population. He described that the book was not intended for extant political fringe organizations; rather it was designed to galvanize a great societal change by inciting the general population. The ultimate goal of the text was to provide the general population with the skills and capabilities to organize against fascist, capitalist, and communist threats that he perceived. Powell stated: "The central idea to the book was that violence is an acceptable means to bring about political change," a sentiment he would renounce later in life.

Powell begins the content of his book discussing anarchy and anarchist theory. Anarchy, by his definition, is a wide scale mass uprising by the people, similar to that of civil disobedience through violence.[5] He believed that anarchy was the innate state of all individuals, and therefore human nature would drive people to participate in such practices. Powell believed that current expressions of politics, arts, music, and education all contained innate principles of anarchist ideals, thereby equating anarchism to individualism. This principle drives Powell's argumentation as he believed that the current political climate and Vietnam war had undermined human values, therefore revolution based upon his perception of human dignity and freedom was what drove him to write the piece. He ends his introduction by warning of the seriousness that these recipes may have deadly consequences if used improperly.[5] The chapters of The Anarchist Cookbook include descriptions and detailed instructions in hand-to-hand combat, explosives, booby traps, drugs, tear gas, sabotage and demolition, surveillance, improvised weapons and other topics related to anarchism.