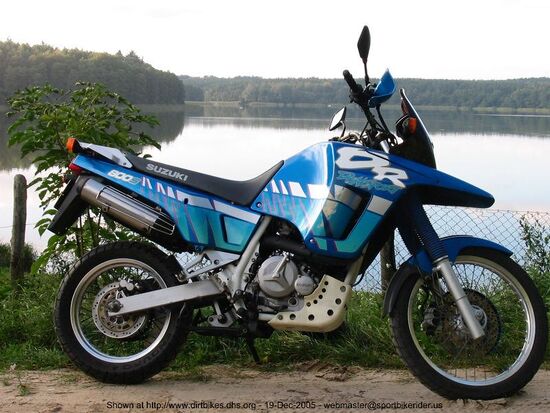 The Suzuki DR 800 S Big touring enduro model appeared in 1990 as a successor of the DR750S Big model, which increased the engine displacement from 727 to 779 cc. In fact, the Suzuki DR 800 S Big is an attempt to create a production motorcycle in the image and likeness of rally bikes, and in particular, the DR-Z car. The motorcycle was intended mainly for foreign markets (Europe), so most of the models are found there, and not in Japan.

The main feature of the Suzuki DR 800 S Big is the 1-cylinder air-oil cooled engine producing 54 hp. power of 62 Nm of torque. The motor has a powerful low to mid-range thrust and shows maximum performance at 5400-6600 rpm. The above power and torque characteristics are relevant for the most powerful version of the motorcycle - depending on the country of sale, these characteristics could change.

Key features of the model also include a Dakar-style body kit, adjustable rear suspension, a 5-speed gearbox, a 24 liter fuel tank (29 liters in versions before 1991) and 194 kg dry matter.

The motorcycle was produced until 1997, after which it was discontinued. In some countries, the model was sold until 2000.