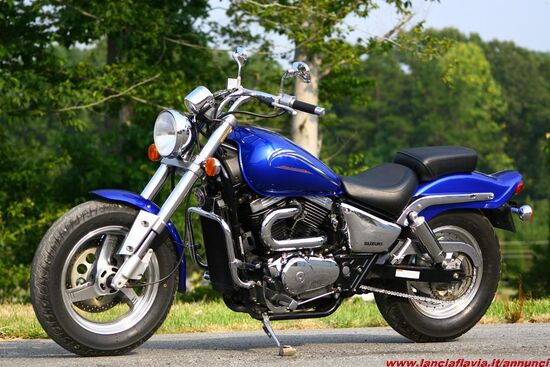 The Suzuki VZ 800 Desperado was first introduced in 1996 as a Japanese version. In 1997, an export version appears, focused primarily on the US market - '' Suzuki VZ 800 Marauder .

The motorcycle was also sold under this name in Europe. The Desperado and Marauder versions are almost identical to each other - the American version differs in the speedometer markings (in miles) and the size of the fasteners (inch threads).

The models are based on a 2-cylinder, V-twin engine from Suzuki VS 800 Intruder with liquid cooling, producing 50 hp. power and 65 Nm of torque. Like all engines for this class of motorcycles, this motor has a pronounced thrust at low and medium speeds, and gives maximum performance at 5000-6500 rpm.

Among the features of the Suzuki VZ 800 Desperado (Marauder) model should be noted the classic steel frame, 5-speed gearbox, chain drive to the rear wheel, inverted fork, classic double shock absorber at the rear and rear drum brake.

The main modifications of the Suzuki VZ 800 Desperado:

On the basis of the Suzuki VZ 800 Desperado, a training model for the domestic Japanese market was also developed - Suzuki VZ 400 Desperado.