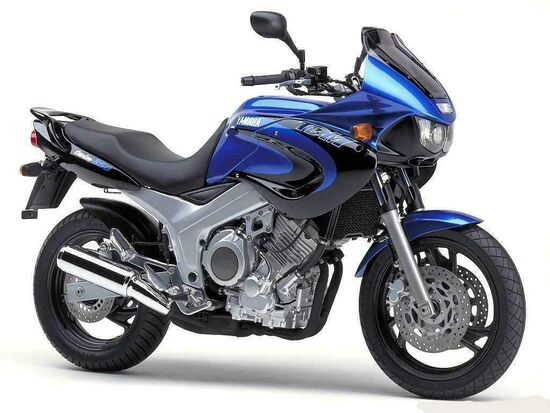 The Yamaha TDM 850 appeared in 1991 and was produced until 2001, after which it was replaced by the updated Yamaha TDM 900. From the very beginning, the motorcycle positioned itself as a universal bike for motorcycle travel, but it is rather difficult to class it as a "Touring Enduro". Today this class of motorcycles is called "SUVs" - they have a straight, comfortable fit, a powerful high-torque engine, high ground clearance, developed wind protection and soft suspensions. All this allows you to travel on roads of various qualities - from autobahns to gravel tracks.

The model was very popular in Europe, and in particular in France, Germany and Greece. The second generation of the motorcycle entered the TOP 15 best-selling motorcycles in the Netherlands.

A special feature of the Yamaha TDM 850 motorcycle is an in-line, 2-cylinder, liquid-cooled engine with 5 valves per cylinder, producing 83 hp. power and 80.4 Nm of torque, available already at 6000 rpm. The motor has a lot in common with the engine from Yamaha XTZ750 Super Tenere and was also installed on the Yamaha TRX 850 model (second generation of the engine - since 1996).

Despite an interesting concept, the Yamaha TDM850 was not the benchmark for reliability and hassle-free operation. Of the most common problems, oil consumption, carburetors (due to vibrations, breaks the wells of the sprayers; since 1999, and the introduction of new carburetors, this problem has been solved) and the design of the rear caliper (due to the skew of the piston, wedging and increased wear of the brake disc is possible). Over the years and the introduction of new generations of the motorcycle, these problems were gradually solved and finally sunk into oblivion on the model TDM900.