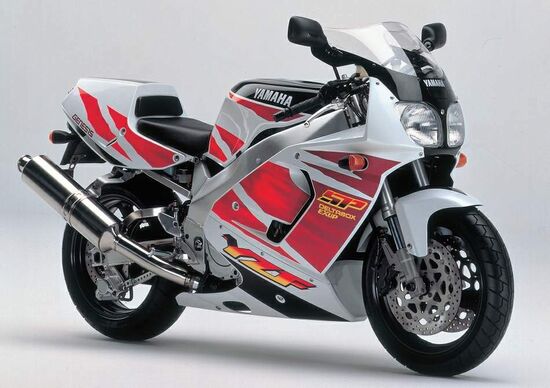 The Yamaha YZF750R appeared in 1993, replacing Yamaha FZR 750 Genesis. Instead of the YZF750R, a "track" modification appeared - Yamaha YZF750SP. It featured a single seat (in the regular version it was also possible to install a plug in the passenger seat), the abbreviation "SP" on the plastic, gear ratios, Keihin FCRD39 flat-choke carburetors and Ohlins rear suspension (the regular version received it by 1996).

Other features of the model include an aluminum frame of the Deltabox type, adjustable sports suspensions, 6-piston front brakes, a 6-speed gearbox, a 19-liter fuel tank and 215 kg of curb weight.

In 1995, the Yamaha YZF750R model was recognized as the best motorcycle of the year according to versions of several magazines at once.

1998 was the last year of production of the model, after which the model finally rolled off the assembly line. As a successor to the Yamaha YZF 750, a small batch (500 units) model Yamaha R7 (YZF-R7) was released, which was the last Yamaha sports bike in the 750cc class.

The main competitors of the Yamaha YZF 750 in the class: