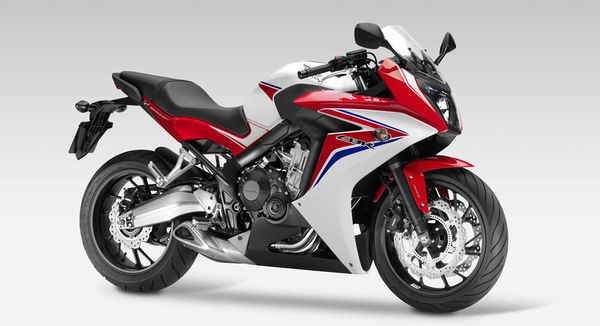 The Honda CBR650F sports touring motorcycle was introduced in 2014 as a budget road bike with a plastic body kit. In parallel, a naked version was presented, which had the name Honda CB650F. Both models are absolutely identical in technical terms and differ only in the front plastic and the type of steering wheel (on the CBR650F - clip-ons, on CB650F - the classic U-shaped steering wheel). The Honda CBR650F is assembled at the Honda Thailand plant.

The Honda CBR650F is based on a new inline 4-cylinder liquid-cooled engine with a volume of 649 cc and 87 hp. power and 63 Nm of torque. The engine is derated and tuned for firm traction from low and medium revs, showing maximum performance at 8000-11000 rpm. Since 2017, the engine settings have been optimized, bringing the maximum power to almost 90 hp and the torque to 64 Nm.

The Honda CBR650F is positioning itself as a budget sports bike aimed at different categories of riders - from beginners to experienced. The derated engine, coupled with smooth power take-off, comfortable fit and the presence of ABS, make this model the most versatile and suitable for the role of the first motorcycle.

The main competitors of the Honda CBR650F:

Considering the reasons behind the appearance of the Honda CBR650F and Honda CB650F models on the market, it seems obvious that Honda is striving to occupy the niche of budget urban motorcycles for every day, where "Ruffs" and "Sabotage" reign supreme. Indeed, despite the presence of a whole line of flagship naked and sports (which, by the way, are in great demand), Honda did not have a budget series of motorcycles that could compete on an equal footing with XJ6 Diversion or ER-6, mainly in price. The appearance of the Honda CBR650F and Honda CB650F solved this problem. Yes, such models do not have sports characteristics and advanced racing technologies, but they are more promising in terms of targeting the general public.

Average official fuel consumption for the Honda CBR650F is 4.7 liters per 100 kilometers. The exact value depends on the riding style.