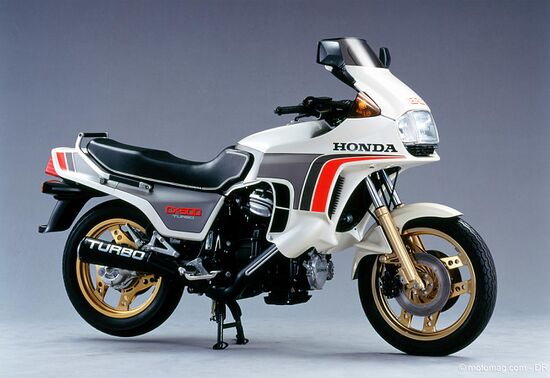 The Honda CX500 appeared in 1977 and was sold until 1986. The motorcycle was available both in the Japanese market (CX400 and GL500 Custom) and in many other countries, including Europe and Australia. The Honda CX500 was the first production motorcycle with tubeless tires and a turbine (the Honda CX500 Turbo version).

The main feature of the Honda CX500 is a liquid-cooled 2-cylinder V-engine, located in the frame longitudinally (as on the Moto Guzzi V2 models), with a volume of 497 cc. see, giving out 50 hp. power and 46 Nm of torque. There were also "strangled" 27 hp versions. and Z5 Nm, available on the market in Europe, and in particular in Germany. It is also noteworthy that at first the longitudinally located V-shaped (90 °) engine, when tested by the pilots, turned out to be extremely inconvenient ergonomically (the legs rested against the carburetors) - to solve this problem, the engineers had to reduce the camber to 80 °, and turn the block heads by 22 ° relative to the cylinder axis.

Other features of the Honda CX500 model include a steel frame, 4-valve cylinder head, disc brakes, a cooling fan (driven by a camshaft) and a cardan drive to the rear wheel.

The main modifications of the Honda CX500:

The Honda CX500 was sold until 1986, after which it was discontinued. Despite the relative rarity of the model in Russia, there are many clubs of amateurs and admirers of this motorcycle in Europe. Some communities even set up production of obsolete parts for the Honda CX500.

The Honda CX500 also traveled around the world from 1983 to 2001, traveling in a total of 119 countries. It is noteworthy that for all 18 years of travel, the engine has never been repaired.