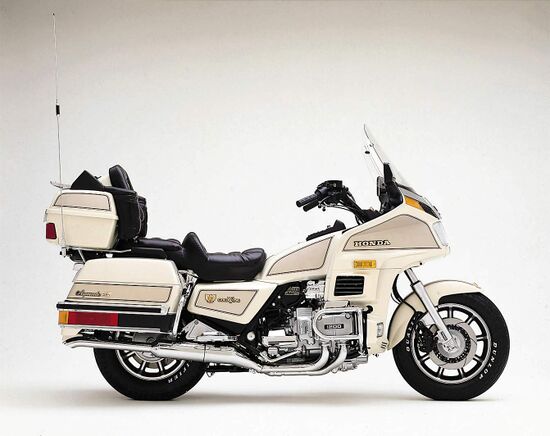 The touring motorcycle model `` Honda GL1200 Gold Wing appeared on the market in 1984 as a replacement for the GL1100 model, in contrast to which the new model received an engine with an increased volume and compression ratio, a new frame, carburetors, a 16 'front wheel, hydraulic clutch and valve clearance compensators.

Initially, two modifications of the motorcycle were offered - the Honda GL1200I Gold Wing Interstate (aka GL1200DX Deluxe outside America) and the Honda GL1200A Gold Wing Aspencade (a more expensive version with an audio system, foot platforms, LCD panel). Also, only in 1984 there was a classic version (Standard), which was not in demand and quickly disappeared from the line.

In 1985, Honda offers a limited version of the Honda GL1200L Gold Wing Limited Edition . It features a gold color, an injector, electronic cruise control, a more expensive audio system, an on-board computer and an automatically adjustable rear suspension. This modification was offered only this year.

In 1986, a new limited modification appears - the Honda GL1200SEI Gold Wing Aspencade. In fact, this is the previous limited edition in a different color.

By 1987, due to the high cost of using the injector, Honda returned to the carburetor power system, leaving the same modifications on the market - Interstate (Deluxe) and Aspencade. This year was the last year of production of the model, after which it was replaced by a new one - Honda GL1500 Gold Wing.

The main competitors of the Honda GL1200 Gold Wing in the class:

The average fuel consumption for the Honda GL1200 Gold Wing, according to the owners, is 6.17 liters per 100 kilometers (fuelly.com service). The exact value depends on the riding style and the condition of the motorcycle.