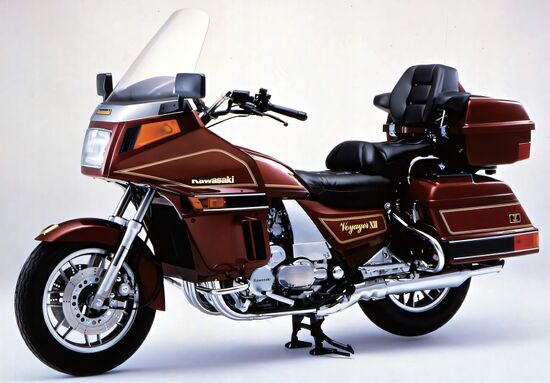 The Kawasaki ZG1200 Voyager first appeared in 1986 as a response to Honda GL1200 Gold Wing and was intended primarily for the US and Canadian markets. In the period from 1988 to 1991. part of the motorcycles, through the efforts of gray importers, ended up on the European market, although the model was not officially supplied there throughout the entire production period. The model was replaced by Kawasaki ZN1300 Voyager.

In terms of equipment, the Kawasaki ZG1200 Voyager model is in no way inferior to the "Gold" - 2 side + 1 central wardrobe trunk with an integrated backrest, cruise control, audio system, front and rear suspension pneumatic pumping.

The Kawasaki ZG1200 Voyager was produced until 2003, after which it was discontinued and no longer sold. Unlike the Gold Wing series, which in 1987 was updated to Gold Wing 1500, and by 2001 it had grown to Gold Wing 1800, the Kawasaki Voyager 1200 was produced practically unchanged and did not receive further development. ... Obviously, this was due to the fact that Kawasaki did not want to once again copy the new generations of the Gold Wing and thereby finally kill the model, but decided to leave the luxury tourer of 80s design, which would be in sufficient demand in the North American market and not would look outdated compared to the classic-shaped bikes popular in the region.

The main competitors of the Kawasaki ZG1200 Voyager in the class: