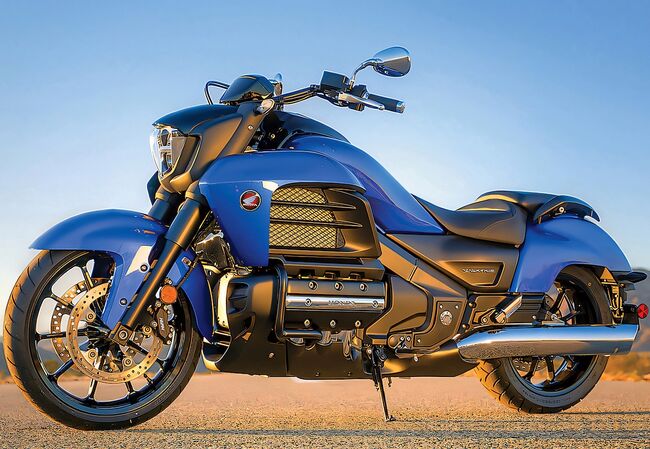 The cruiser model Honda GL1800 F6C Valkyrie was first unveiled at the 2013 Tokyo Motor Show, and official sales began in the spring of 2014.

The model is a reincarnation of the old version Honda GL1500C F6C Valkyrie in a new, more modern design. And if the old Honda Valkyrie 1500 had a lot of differences from the original Gold Wing 1500 (new frame, engine settings, gear ratios, gearbox, cylinder head), then the new generation Honda GL1800 F6C Valkyrie differs from Gold Wing 1800 not so much - engine, frame and swingarm remain unchanged. The main differences are in appearance, wheels, braking system, seat, steering wheel and some parameters such as the angle of the front fork, the exhaust setting, etc.

The frame is an aluminum diamond design with a Pro-Arm cantilever rear swingarm. This node is borrowed unchanged from Gold Wing 1800.

The fuel tank has been reduced to 23 liters compared to the Honda GL1800 Gold Wing.

All of the above changes made it possible to make a motorcycle as close as possible to the class of cruisers, having a classic low seating position, a lower center of gravity, more stable on a straight line and with a lower (70 kg less than the original GL1800 Gold Wing) curb weight without the introduction of radical alterations in the design of the basic version. In fact, the slight differences between the Honda GL1800 F6C Valkyrie and the Honda GL1800 Gold Wing allow us to consider the modern Valkyrie F6C as one of the trim levels Gold Wing 1800, and not as a separate motorcycle.

The officially declared fuel consumption of the Honda GL1800 F6C Valkyrie is 6.03 liters per 100 kilometers. The exact value depends on the riding style.