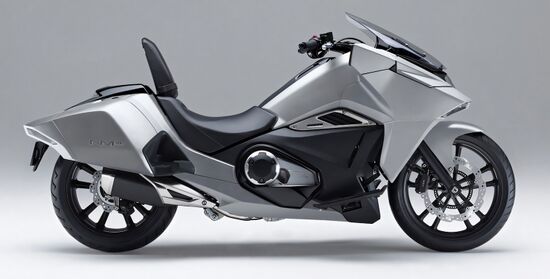 The Honda NM4 Vultus touring motorcycle was introduced as a concept in April 2014 at the Osaka Motorcycle Show and Tokyo Motor Show, and went on sale in June of that year. The motorcycle has a very futuristic design, resembling Honda DN-01 in appearance. The reason for the creation of the Honda NM4 Vultus was the desire of Honda designers to present to the market a unique motorcycle from Japanese anime. By the way, the presentation of the motorcycle was also held at the London Comic Con, the largest show in Europe, dedicated to comics, anime and everything related to them. This fact is symbolic and once again emphasizes the concept and main idea of ​​the motorcycle.

The model also has the name - Honda NC700JD'. In the North American market, the model was sold under the name Honda NM4 (without the Vultus prefix).

Despite its unique design, the Honda NM4 Vultus is not a truly unique motorcycle. It is based on the platform Honda NC 750, with the same engine, DCT automatic transmission and chassis. The model is targeted at sales in Asia and North America.

Other features of the Honda NM4 Vultus include a steel tubular frame, a 6-speed automatic transmission with two DCT clutches, a chain drive and simple suspensions in the form of a conventional telescopic fork and monoshock.

The main modifications of the Honda NM4 (Vultus):

In 2016, the Honda NM4 Vultus underwent minor changes in DCT settings and the introduction of a new exhaust system.