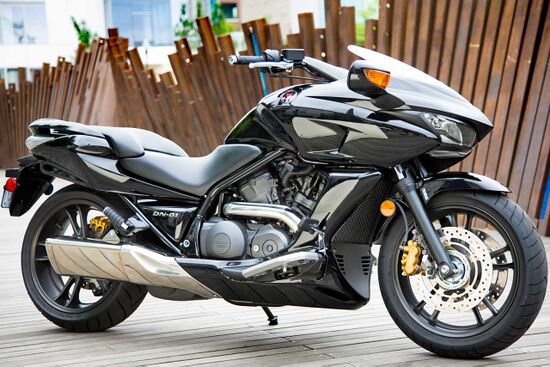 The Honda DN-01 touring motorcycle model was first presented in 2005 at the Tokyo Motor Show, and since 2008 has gone on official sales in Europe and Japan (a small part of the motorcycles were also sold in Australia and Korea). Since 2009, the Honda DN-01 has been sold in the United States. Despite the interesting concept, the model turned out to be a failure and lasted only until 2010.

Meanwhile, the DN-01 experience was not in vain, and in 2014 the Honda CTX700 model was introduced, the touring version of which vaguely resembled the DN-01, but had nothing to do with it technically. In addition, in the same year, the futuristic model Honda NM4 Vultus was introduced, which can be called a direct successor of the DN-01.

The model also has the name - Honda NSA700A.

The Honda DN-01 was based on the engine from the enduro tourist Honda XL700V Transalp - an injection 2-cylinder V-shaped block of liquid cooling, producing 61 hp. power and 64 Nm of torque. The maximum engine performance was reached at 6000-7500 rpm. This motor was also installed on Honda NT700V Deauville.

The main feature of the Honda DN-01 is the automatic continuously variable transmission CVT, which has the ability to shift gears in manual mode.

Other features of the Honda DN-01 include a futuristic appearance, a steel frame, a combined braking system with ABS, simple suspensions in the form of a conventional telescopic fork and a mono-shock absorber (adjustable in preload), a cantilever rear swingarm and 270 kg of dry weight.

As mentioned above, the Honda DN-01 model was produced for only 2 years, after which it was discontinued. The main reason for the lack of demand for the model was its ill-conceivedness and high price. Despite the fact that the DN-01 positioned itself as a touring motorcycle, many drivers noted a rather uncomfortable fit, weak engine power, which does not allow full loading of the motorcycle and a comfortable ride with a passenger, ineffective wind protection and an almost complete absence of glove compartments and luggage compartments.

Fuel consumption for the Honda DN-01 is declared by the manufacturer in the region of 4.9-5.5 liters per 100 km.