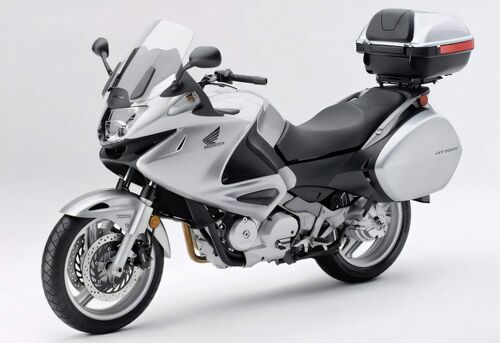 Touring motorcycle model "Honda NT700V Deauville" "appeared in 2006 as a continuation of the model Honda NT650V Deauville. Compared to its predecessor, the new model has received a number of technical differences:

Like the Honda NT650V Deauville, the new Honda NT700V Deauville was exclusively export-oriented. In Europe, the model was called - "" Honda Deauville 700 "". Since 2010, the motorcycle has been officially delivered to the North American market. There he did not have the Deauville prefix in the name, but was sold under the name - Honda NT700V.

A unique concept based on a medium-cubic fuel-efficient V-engine in the frame of a touring motorcycle, coupled with touring options (built-in lockable trunks, cardan, adjustable glass and footrests, developed wind protection) and a low price, made the model at one time very popular in Europe, in fact, not having competitors.

2014 was the last year of production of the Honda NT700V Deauville model, after which it disappeared from dealers and did not receive further development. The concept of using V-shaped 2-cylinder engines in touring models was also "buried" - instead of it, the market was offered budget models of the NC and CTX700 series, as well as more expensive CTX1300 and VFR.

The average fuel consumption for the Honda NT700V Deauville, according to the owners, is 5-6 liters per 100 kilometers. The exact value depends on the riding style.