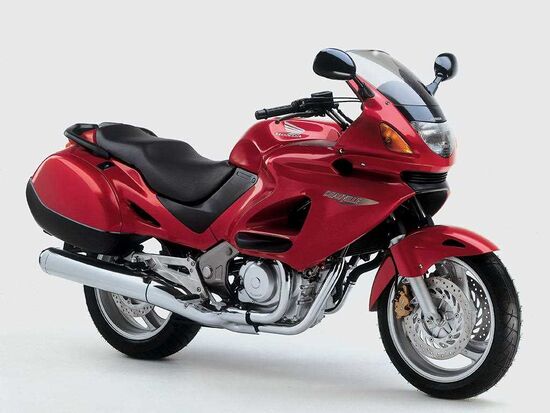 The Honda NT 650 V Deauville touring motorcycle model was first introduced in 1998 based on the Honda NTV650 Revere - European modification Bros 650. The model was focused exclusively on the European market and was not officially presented on other continents. The motorcycle is also known as the Honda Deauville 650.

In 2002, the Honda NT650V Deauville received several significant changes, the main ones of which were the combined brakes (visually distinguished by black 3-piston Nissin calipers in front, previous versions had gold 2-piston Brembo calipers) and modified saddlebags (more reliable latches and fasteners; increased capacity : left case - from 18 to 24 liters, right - from 16.7 to 19.5 liters). In addition, the engine received lightweight pistons and a catalyst for the new European emission standards.

The Honda Deauville 650 engine is a 2-cylinder V-shaped block of liquid cooling, with a volume of 647 cc. see, delivering 56 hp. power and 57 Nm of torque. Thanks to the use of a cylinder head with 3 valves per cylinder, the engine has good traction and fuel efficiency - fuel consumption on the highway, according to the owners, easily fits into 5 liters. This engine was also installed on models Honda Bros 650 (NTV 650, Hawk) and Honda XL650V Transalp.

From the touring advantages of the model, it is worth highlighting the developed wind protection, the presence of built-in lockable side trunks, a cardan drive, a 19-liter fuel tank, audio preparation, adjustable footrests and a combined brake system.

The average fuel consumption for the Honda NT 650V Deauville, according to the owners, is 5.11 liters per 100 kilometers. The exact value depends on the riding style.