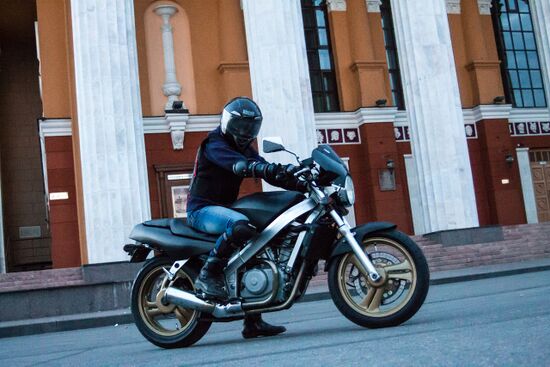 The Honda Bros 650 road bike model was produced from 1988 to 1992. Despite such a short release period, the model still has many fans around the world. At the time of its release, the Honda Bros 650 was considered to be technically advanced - an aluminum diagonal frame, a "Pro-Arm" cantilever rear swingarm, installed on the sports tourist Honda VFR750F.

However, the main feature of the motorcycle is its engine, which is a V-shaped 2-cylinder liquid-cooled block with a volume of 647 cc. see, issuing 56 hp. power and almost 57 Nm of torque, available already at 6000 rpm. The engine has a steady, confident thrust at low and medium revs. This engine was also installed on models Honda NT 650 Deauville and Honda XL 650 V Transalp.

Despite the generally interesting concept, the Honda Bros 650, NT650 Hawk GT and NTV600 models were completely discontinued in 1991-1992. The only exception was the European model Honda NTV650 Revere, which was on the market until 1998, after which it was replaced by the touring version Honda NT650V Deauville, built on the common basis of the NTV650.

Currently, only Japanese (Bros 650) and European (NTV650) versions are found on the Russian market, all others are extremely rare.

The main competitors of the Honda Bros 650 in the class:

Official declared fuel consumption for Honda Bros 650, Honda NTV600 / 650 Revere and Honda NT650 Hawk GT is 4.5 to 5 liters per 100 kilometers. The exact value depends on the riding style and the condition of the motorcycle.