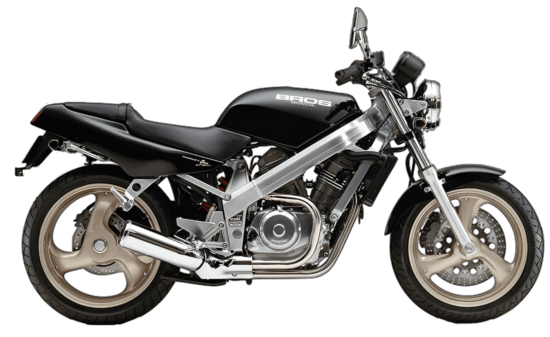 The naked model Honda Bros 400 (NT400) was introduced in 1988 simultaneously with the release of the older version Honda Bros 650. The main differences between the Bros 400 and Bros 650 were the engine, carburetors and gearbox ratios. In all other respects, they are practically identical motorcycle. The Honda NT400 Bros model was sold only in the domestic Japanese market, was not officially exported anywhere and did not have export modifications (unlike Bros 650).

The Honda Bros 400 was designed for novice pilots with an entry-level driver's license. The low stance, light weight and smooth engine make this bike ideal for beginners and girls alike.

An important feature of the motorcycle is the aluminum frame and the cantilever (one-sided) rear swingarm (Pro-Arm), which is also used on the Honda VFR750. Suspensions are presented in the form of a classic fork and a rear monoshock with preload adjustment. The brakes are disc brakes, the front is a 316 mm disc with a 4-piston caliper, and the rear is a single 236 mm disc with a 1-piston caliper.

Despite the advanced technologies used in the Honda Bros 400, the model enjoyed very low market demand, which forced the company to discontinue production in 1990. The main reason, in my opinion, was a significant advance of its time - at that time there was no class of naked bikes and consumers simply did not understand the essence of such motorcycles. The weaker Bros 400 engine also didn't play into his hands, although the more powerful version Bros 650 "lived" on the market just a couple of years longer. The only exception to this was the European version NTV650, which lasted until 1998. Probably the more classic NTV650 Revere was easier to find buyers because it had familiar features, was practical and understandable for consumers.

The main competitors of the Honda Bros 400:

Average declared fuel consumption for the Honda Bros 400 is 4.5 liters per 100 kilometers. The exact value depends on the riding style and the condition of the motorcycle.