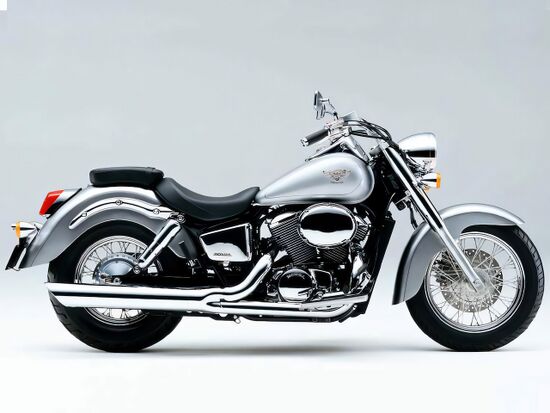 The cruiser series'Honda Shadow 400'begins its history in 1997 when, as the successor to Honda Steed 400, an updated model was presented -'Honda Shadow 400, which, like Steed , had the factory code "NV400" ". Despite this, Steed continued to be released in parallel until 2001, offering new modifications and minor updates.

The Shadow 400 was released at the same time as Honda Shadow 750 A.C.E. as its "little brother", built on a common base, but with an engine from Steed 400. Subsequently, both models (750 and 400) underwent the same restyling, and also offered almost the same modifications, which could only differ in names. Simply put, the Shadow 400 copied almost everything from the "big brother" Shadow 750, being with him practically the same motorcycle, but with a different engine.

In 2000, along with the 750th version, the Honda Shadow 400 expands the series, offering a new modification - the Honda Shadow 400 Slasher. Visually, the model is completely similar to Honda VT750DC Shadow Spirit (Black Widow, Slasher). Like the regular Shadow 400, the new Slasher has the same factory code as the Steed - NV400.

In 2010, another modification appears - Honda VT400S . Externally, the model is completely identical to Honda VT750S (aka Honda Shadow 750 RS).

2014 was the last year of production for the Custom and VT400S, and in 2016 the Classic was finally discontinued. Thus, the Honda Shadow 400 is no longer in production, but a large number of motorcycles can be found at Japanese auctions. Quantitatively, there are many more old versions (NV400 Shadow / Slasher, 1997-2008) than new modifications (Classic, Custom, RS). This is due to the significantly smaller production of new modifications, the total number of which has been decreasing from year to year.