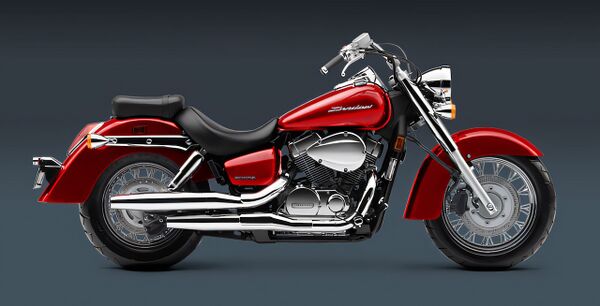 The Honda Shadow 750 series of cruisers began its history in 1983 with the introduction of the Honda NV750 Custom model, which was available in the markets of North America and Japan. In 1986, the motorcycle changed its name to the Shadow 750, which was updated both technically and visually. The then model was pretty much forced (which is typical for all Japanese cruisers of those years), giving out up to 66 hp. power. These versions are present at Japanese auctions, but due to their age, there are not so many of them.

In 1997, the first version with the name Honda VT750 Shadow entered the market in the American Classic Edition (A.C.E.) modification, which began the rapid growth of the model's popularity. The modification featured classic American features with deep fenders, wide spoked wheels and chain drive. In parallel, an internal Japanese modification was released - Honda Shadow 400.

In 2000, a new modification is added to the Shadow 750 line - the Honda VT750DC Shadow Spirit. In Japan it was sold under the name Slasher and in Europe as Black Widow . The model featured short fenders, a slender 19 'front wheel and a smaller fuel tank (13L instead of 14L in A.C.E.). The rest of the motorcycle was equipped with the same engine, chain drive and two carburetors.

In 2003, a modification of the Honda VT750C Shadow A.C.E. finally leaves the market, giving way to a new - '' Honda VT750C Aero . The new model received many technical changes regarding ergonomics, overall dimensions, front suspension, engine, intake system (using one carburetor instead of two) and drive (instead of a chain, the model received a cardan shaft and modified gear ratios).

In 2007, the modification of the Honda VT750DC Shadow Spirit (Slasher, Black Widow) leaves the market, giving way to the new Honda VT750C2 Shadow Spirit. The model visually resembles the previous modification, however, it is equipped with a 21 'front wheel, electronic fuel injection (since 2008, in 2007 - 1 carburetor), a cardan drive and a 14 liter tank. The Aero modification receives an injector.

In 2009, another modification appears - Honda VT750C2B Phantom. In some countries it was sold under the name Black Spirit . Despite the similarity of the name with the Honda VT750C2 Shadow Spirit, the Phantom modification is not associated with it, but is a version of the Aero in black, with a straight steering wheel and short fenders. Versions with ABS appear in the Aero modification.

In 2010, another modification was presented - ' Honda VT750RS Shadow . Marketed in Japan as Honda VT750S. Visually reminiscent of the classic model Honda VRX400. It differs from the entire line of the Shadow 750 with a shortened wheelbase, increased saddle height, increased ground clearance, practically the lowest curb weight (second only to the NV750 Custom), a 10-liter fuel tank and a chain drive.

Currently, only the Aero and Phantom versions are present in the production line.

The main competitors of the Honda Shadow 750 in the class:

Average fuel consumption on injection versions of the Honda Shadow 750 is 4.2 liters per 100 kilometers. The exact value depends on the riding style.