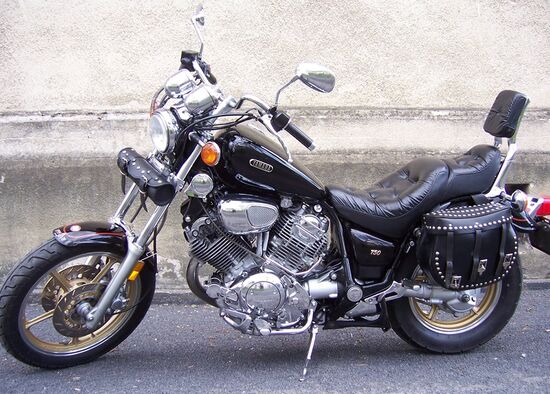 The Yamaha XV 750 Virago appeared in 1981 and became the first motorcycle in the then new Virago line. The first versions of the Virago 750 outwardly resembled a classic road bike, and only in 1984, after undergoing restyling, the model received the well-known features of a short-base cruiser.

The Virago 750 is a classic short-wheelbase cruiser in the style of the 80s and early 90s. In parallel, many modifications of the motorcycle were released, but the most popular models are still 400, 750 and 1100 cc. see In 1998, the Yamaha XV 750 Virago is discontinued, and by 2000 the entire Virago series is finally leaving the market, giving way to more modern models of the Star series: Drag Star for Europe and V-Star for America.

The Yamaha XV750 Virago is equipped with a 2-cylinder V-shaped (75 °) air-cooled 748 cc engine with 2 valves per cylinder, producing up to 60 hp. power in older versions and up to 65 Nm of torque. Unlike modern cruisers, the engine was quite revolving and gave out maximum performance at 6000-7000 rpm.

Other features of the Virago 750 include a steel frame (the engine is the main supporting element), classic suspensions in the form of a telescopic fork and double shock absorber, front disc and rear drum brakes, a 5-speed gearbox, a cardan drive, a 14.5 liter fuel tank and 235 kg of curb weight.

The main modifications of the Virago 750:

This classification applies to Japanese versions of the motorcycle produced from 1984 to 1988. European versions also had spoke and cast wheels - spoke versions were available through 1996.

1998 was the last year of production of the Yamaha XV750 Virago, after which it left the market and did not receive further development.

The main competitors of the Yamaha XV 750 Virago in the class: