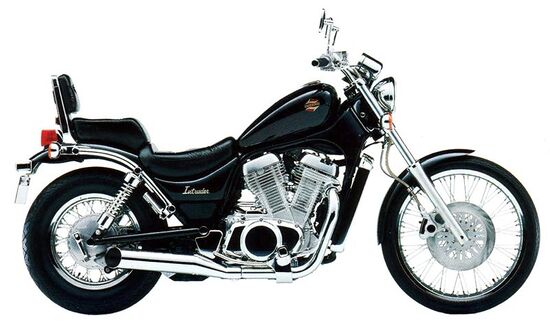 Suzuki VS 750 Intruder appeared in 1985 and was produced until 1991. This model is the very first in the Intruder line and is the predecessor of the Intruder 800 series. The motorcycle was sold not only in Japan, but was also exported - in particular in the US market, this model was called `` Suzuki VS700 Intruder and was equipped with a 699 cc engine. This restriction was caused by the introduction of increased customs duties on imported motorcycles with an engine capacity of over 700cc. In 1986 the duties were canceled and by 1988 Suzuki had updated the American version to the standard VS750 Intruder.

The main modifications of the Suzuki VS 750 Intruder:

The first versions (1985) Suzuki VS750 Intruder were the most powerful - 63 hp. and 68 Nm. However, the motor was subsequently reconfigured, slightly lowering the operating speed and reducing the characteristics to 55 hp. and 60 Nm. By the way, the model Suzuki VS800 Intruder that replaced the VS750, although it received a new 805 cc engine, was almost identical in characteristics to the old VS750 - only the torque indicator increased by 4 Nm.

The features of the Suzuki VS750 Intruder include a steel tubular frame, traditional for this class, simple suspensions in the form of a telescopic fork and double shock absorber, spoke wheels, a rear drum brake, a 12 liter fuel tank (California version - 11 liters), a cardan drive and from 185 kg dry matter (depending on modification).

1991 was the last year of production for the Suzuki VS750 Intruder, after which it was replaced by Suzuki VS800 Intruder, which was virtually identical to its predecessor.

The main competitors of the Suzuki VS750 Intruder in the class: