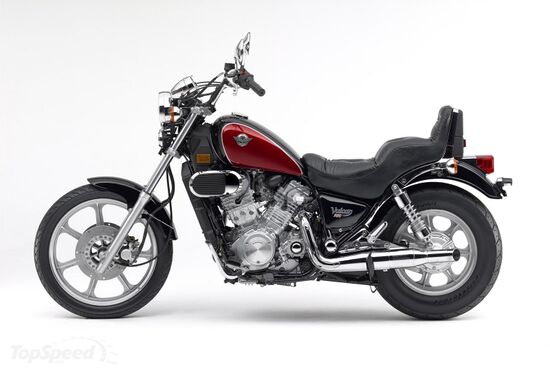 The Kawasaki VN 750 Vulcan was introduced at the end of 1984 and was sold until 2006. This model is Kawasaki's first production cruiser with a V-2-cylinder engine. Despite the fact that the vast majority of Japanese motorcycles with 750cc engines. see were a purely domestic Japanese product, the Kawasaki VN 750 Vulcan was actively exported to the United States and had a good level of sales there. In 1985, the United States imposed increased customs duties on imports of motorcycles over 700 cc. see, which forced Kawasaki to reduce the volume of the "Volcano" to 699 cubic meters. see and rename it to Kawasaki Vulcan 700 . However, a year later, in 1986, customs restrictions were lifted and the original version with an engine capacity of 750 cc was supplied to the US market. see. Naturally, such changes were also reflected in the name of the model, which was now called the Kawasaki Vulcan 750.

The model may also be called Kawasaki VN 750 Twin.

The main feature of the Kawasaki VN 750 Vulcan is a liquid-cooled V-twin 2-cylinder engine that produces 66 hp. power and 65 Nm of torque, which makes it perhaps the most powerful motorcycle in the Cruiser class for its engine size. In addition, the data from the dino-stand shows that the declared characteristics of the motor are underestimated by 8-10% of the real values ​​of power and torque. This fact indicates that either Kawasaki did not have enough experience in building classic cruisers, and therefore, out of habit, created a motorcycle with sporty characteristics (the "red zone" of the engine starts at 8500 rpm), or this step was deliberate, and the appearance of such a powerful bike was due only to the desire to bypass competitors, but then it looks illogical to underestimate the real characteristics of the motor.

The main modifications of the Kawasaki VN 750 Vulcan:

Other features of the Kawasaki VN 750 Vulcan include a steel frame, cardan drive, dual disc brakes in the front and rear drum, hydraulic lifters and simple suspension in the form of a conventional telescopic fork in the front and a double shock absorber in the rear.

The model was produced until 2006, after which it was discontinued. In 1995, the Kawasaki VN 800 Vulcan entered the market as a replacement for the obsolete Kawasaki VN 750 Vulcan, although the latter also continued to be sold in parallel, particularly in the US market.

The main competitors of the Kawasaki VN 750 Vulcan in the class: