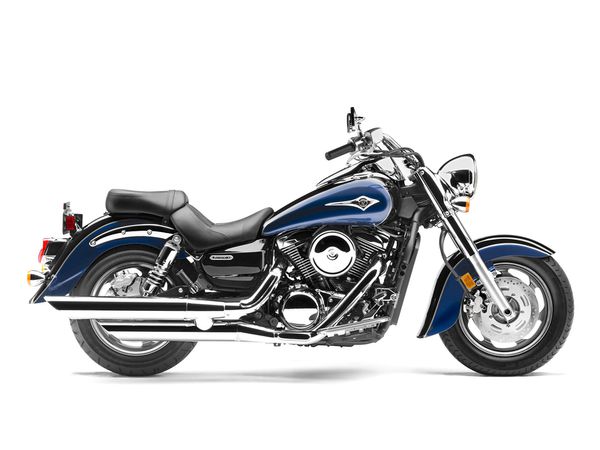 The Kawasaki VN 1600 Vulcan cruiser series appeared on the market in 2003 as a continuation of the VN1500 Vulcan series, which, despite the appearance of a new model, was produced until 2008 inclusively, that is, during the entire production period of the VN1600.

The main innovation of the Kawasaki VN1600 Vulcan was the use of a new engine with an increased displacement from 1470 cc to 1552 cc (due to increased crankshaft travel) with a new, faster control unit. This allowed a slight increase in maximum power (from 65 hp to 67 hp) and a significant increase in the torque characteristic (from 114 Nm / 2800 rpm to 127 Nm / 2700 rpm).

The Mean Streak modification additionally received increased throttle valves (from 36 to 40 mm) and a new braking system (from 2005): 6-piston calipers were replaced by 4-piston radial arrangement.

In addition, the Classic version received alloy wheels and a double disc brake at the front. Also, the Classic and Classic Tourer (Nomad) modifications received an increased fuel tank (from 19 to 20 liters).

The Drifter modification was no longer offered.

2008 was the last year of production for the Kawasaki VN1600 Vulcan series, after which it was replaced by an updated series - Kawasaki VN1700 Vulcan.

The main competitors of the Kawasaki VN 1600 Vulcan in the class: