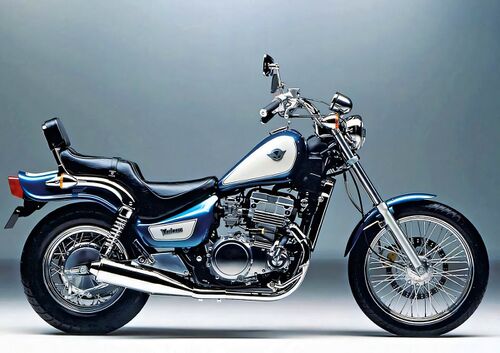 The Kawasaki Vulcan 400 begins its history in 1985 and the model Kawasaki EN400 Vulcan. This motorcycle was built on the basis of an in-line 2-cylinder engine, which was quite resourceful and powerful, and in character bears little resemblance to classic cruisers.

By 1995, the EN400 was leaving the market, giving way to the Kawasaki VN400 Vulcan. The new model already had the usual V-shaped engine and chain drive (the EN400 was equipped with a belt drive). It was this model that gained significant popularity not only in Japan, but also in Russia (mainly due to its low cost and similarity to the older 800 cc model). Model Kawasaki VN 400 Vulcan is based on the older version Kawasaki VN800 Vulcan, differing only in engine size, carburetor and other minor changes. The interchangeability of parts of one and second model is very high - most of the VN400 parts are fully compatible with the VN800.

The main modifications of the Kawasaki VN400 Vulcan:

The main features of the Kawasaki VN400 Vulcan model are liquid cooling, a 5-speed gearbox and a chain drive to the rear wheel. Suspensions are presented in the form of a conventional telescopic fork at the front and a monoshock (adjustable in preload) at the rear. The model is very simple and reliable, without any pronounced "diseases" and problems.

2003 was the last year of production for the Kawasaki VN400 Vulcan. Currently, this model is found in large quantities at Japanese auctions and is quite often brought by the efforts of gray importers to the Russian market.

The main competitors of the Kawasaki VN 400 Vulcan in the class: