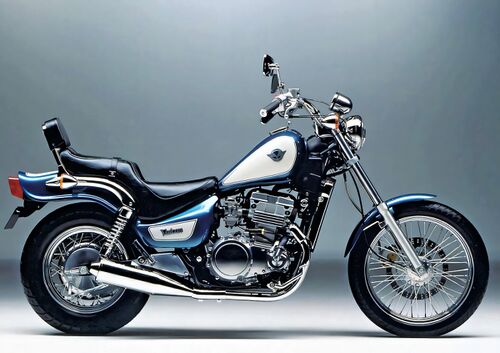 The Kawasaki EN 400 Vulcan was created in 1985 based on the export version of the Kawasaki EN450 Vulcan (Vulcan 454 LTD) and was intended for the domestic Japanese market.

The model was based on a 2-cylinder in-line liquid-cooled engine with a volume of about 400 cubic meters. cm, delivering 45 hp. power and 33 Nm of torque. The engine was taken almost unchanged from the sports model Kawasaki GPZ400S and was subsequently installed on Kawasaki EX-4 and Kawasaki KLE 400. At that time, the company did not have experience in creating classic cruisers, therefore, they were often based on sufficiently forced engines, delivering record power for a motorcycle of this class. Over time, all Japanese companies came to the correct understanding of the "cruiser" class and updated their models, making them more similar to American classic motorcycles. Among the features of the Kawasaki EN 400 Vulcan, it should be noted the classic steel frame, belt drive, front disc brake (rear - drum), 6-speed gearbox, 11 l fuel tank and 197 kg of curb weight.

The export version Kawasaki EN500 Vulcan (which replaced the Vulcan 454 LTD) was subsequently created on a single base with the Kawasaki EN400 Vulcan, which was soon updated and changed its name to Vulcan 500 LTD, and was sold on foreign markets until 2009.

The very same model Kawasaki EN400 Vulcan is often considered as the first generation of the Vulcan 400 series. Since 1995, the EN400 Vulcan changes its name to VN400 Vulcan, gets a completely different look, a new V-engine, and also two new modifications - Classic and Drifter. It was this generation that gained wide popularity in Japan and Russia, while the Kawasaki EN400 Vulcan was never in good demand - this model is quite rare at Japanese auctions, and literally a few units are presented in Russia.

The main competitors of the Kawasaki EN400 Vulcan: