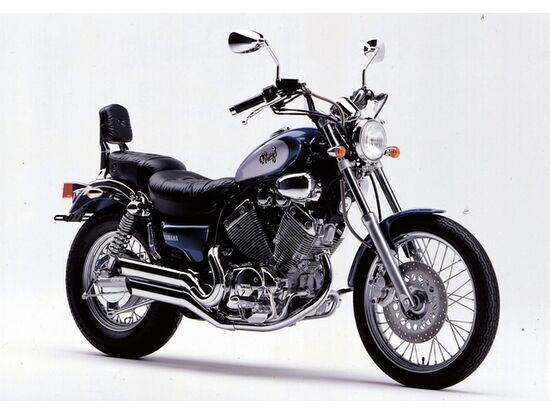 The Yamaha Virago 400 was introduced in March 1987 for the Japanese domestic market. The model is based on the export version Yamaha Virago 535 and has a lot in common with it. The main differences are in the engine and some other technical characteristics.

The basis for the Yamaha XV400 Virago was a 2-cylinder V-twin air-cooled engine, 399 cc, producing 40 hp. power and 34 Nm of torque. The motor is quick enough for a model of this class, but typical for a motorcycle of this size. The maximum performance is at 7000-8500 rpm.

In general, the motorcycle has a simple layout with a steel backbone frame (engine-carrying part), conventional suspensions, cardan drive, front disc and rear drum brakes, and a 5-speed gearbox.

The main modifications of the Yamaha XV400 Virago:

In 1989, the model receives a small change regarding the increase in the fuel tank (the false tank receives the functions of a real fuel tank, which increases the total capacity to 13.5 liters).

In 1994, the motorcycle received a perforated front brake disc and a 2-piston caliper (instead of a 1-piston). The same year was the last year of the model's production. Currently, the Yamaha XV400 Virago is widely represented at Japanese auctions and is one of the most affordable cruisers in its cubic capacity.

In 1996, a completely updated model was proposed as the successor to the Yamaha Virago 400 - Yamaha XVS400 Drag Star.

The main competitors of the Yamaha Virago 400 in the class: