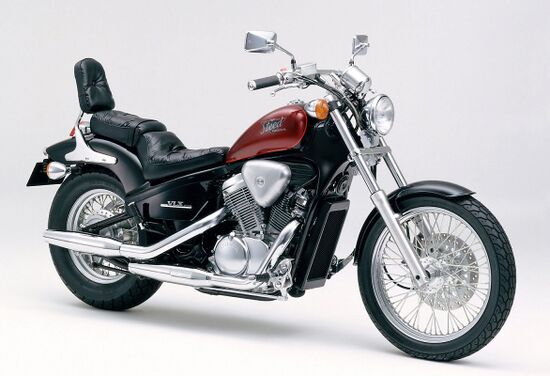 The cruiser model Honda Steed 400 appears on the Japanese market in 1988 in parallel with the older version Honda Steed 600. In the early years of production (until 1991), the model was in extremely low demand and there were even rumors that Honda was planning to complete production of the motorcycle. By 1993, however, Japan was experiencing another boom in American-style motorcycles, and the Steed 400 quickly became a bestseller - in 10 years of production, the total number of Steed 400 and 600 sold reached 80,000 units.

Why did both versions exist at the same time? The fact is that in Japan, driving licenses for motor vehicles have a different level, depending on the driving experience. Thus, the Steed 400 could be used by any aspiring driver who had recently graduated from motorcycle school, while the Honda Steed 600 required a more advanced license.

Of the features of the Steed 400, it should be noted the classic steel duplex frame, front disc and rear drum brakes, simple suspensions in the form of a conventional telescopic fork (VLS - springer) and a rear mono-shock absorber, a fuel tank of 9-11 liters (depending on the year and version), 5-speed gearbox and curb weight from 208 kg.

At first, there was only one modification of the Honda Steed 400 on the market (in addition, it was possible to choose only a steering wheel - a curved or straight drag bar), which received the abbreviation `` VLX (transcript: V-Twin, Lowered, eXtended rake) - this is designation of the standard version of the motorcycle.

In 1995, the model line was replenished with 2 modifications at once - VCL (transcript: V-Twin, Custom Limited) and VSE (transcript: V-Twin, Special Edition). The VCL is a budget variant of the standard VLX, featuring no passenger backrest, a drag bar in stock and a simpler saddle. This version was 30,000 yen cheaper than the VLX. The VSE modification received a cast rear wheel in the style of Honda Magna and a curved steering wheel in stock. Both versions existed until 1996, after which they were no longer offered.

In 1998, a new modification was added to the Steed 400 line - VLS (transcript: V-Twin, Lowered, Springer front end). It features unique styling with a springer instead of a classic fork, a 21 'front wheel, reduced fuel tank, ergonomics and dimensions. This version existed only during 1998.

2001 was the last year of production of the Honda Steed 400, which was slightly updated (added an exhaust afterburning system for new environmental standards and other minor innovations) and finally rolled off the assembly line. In 1997, a new model was proposed as the successor to the Steed 400 - Honda Shadow 400.

The officially declared fuel consumption of the Honda Steed 400 is 2.74 liters per 100 kilometers (Japanese method: constant speed 60 km / h, driver + passenger). The real consumption value, according to the owners, is 4-5 liters. The exact value depends on the riding style.