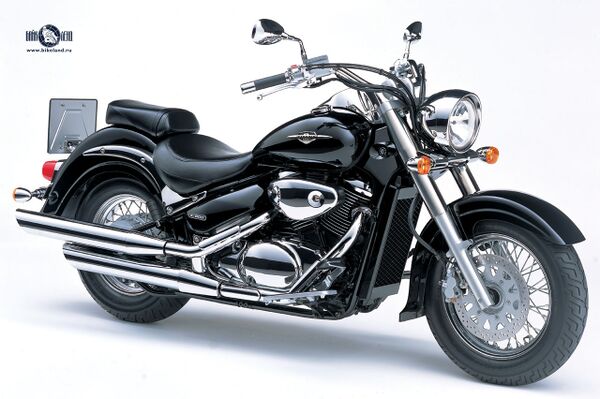 Suzuki VL400 Intruder appeared in 2001 as a successor of the model Suzuki VS400 Intruder. The motorcycle is aimed at the Japanese market and is not officially supplied to other markets. In Japan, this model may also be called - Suzuki Intruder 400 Classic '.

At its core, the Suzuki VL400 Intruder is an export Suzuki VL800 Volusia (later versions - Intruder C800 / Boulevard C50) with a reduced engine displacement. In all other respects, these bikes are identical.

The Suzuki Intruder 400 Classic is powered by a standard 2-cylinder V-engine, almost the same as the old Suzuki VS400 Intruder. By the way, the same engine goes to the domestic Japanese model Suzuki Boulevard 400, and produces the standard 33 hp. power.

The Intruder 400 Classic features a classic steel frame, rear suspension in the form of a monoshock, rear drum brake, an instrument panel with an electronic fuel gauge, a 17 liter fuel tank (15 liters since 2009) and a cardan drive to the rear wheel.

The main generations of the Suzuki VL 400 Intruder Classic:

The Intruder 400 Classic was produced until 2017, after which it was discontinued. This model is rarely found on the Russian market, since the price is comparable to the cost of slightly older cruiser models of larger cubic capacity.

The main competitors of the Suzuki VL400 Intruder in the class: