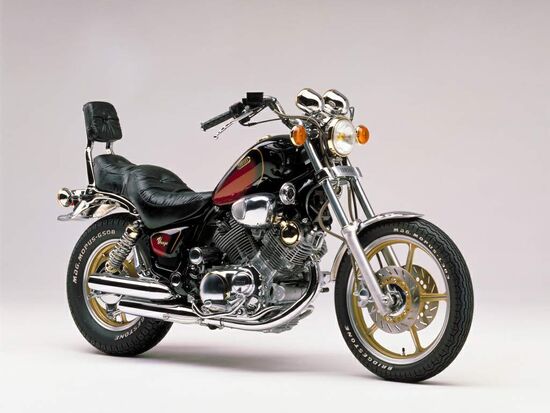 The Yamaha XV 1100 Virago has been on the market since 1986 and was based on Yamaha XV750 Virago. The motorcycle was mainly export-oriented, but for a while it was officially available in Japan as well. The model received an updated engine from XV750 Virago of increased volume, which had already solved the problem of a quick failure of the starter, but the problem with the overrunning clutch haunted the model throughout its history, and even in the subsequent model Yamaha XVS1100 Drag Star this problem has not been resolved.

The Yamaha Virago 1100 was based on a 2-cylinder V-shaped air-cooled engine with a volume of 1063 cm³, producing almost 62 hp. power and 85 Nm of torque. The motor has one camshaft in each cylinder head and 2 valves per cylinder. The maximum performance of the motor is already achieved from 3000 rpm.

The characteristic features of the Yamaha XV 1100 Virago include a steel frame (engine as a supporting element), simple suspensions in the form of a telescopic fork in front and a double shock absorber in the rear, cardan drive, double-disc front brakes and drum rear, a fuel tank of 16.8 liters and 239 kg of curb weight.

In 1994, in addition to the basic version with cast wheels, a modification with spokes appeared, which also differed in the design of the calipers (parallel arrangement of pistons instead of opposed ones) and brake discs. Since 1996, the basic version (with alloy discs) receives the same brake discs.

1999 was the last year of production for the Yamaha XV1100 Virago, after which it left the market, giving way to Yamaha XVS1100 Drag Star (V-Star), which received a number of technical differences, but was built on the same engine ...

Currently, Virago 1100 is widely represented at Japanese auctions and the market of used motorcycles in the Russian Federation, and is one of the most affordable models in its class and cubic capacity.

The main competitors of the Yamaha XV 1100 Virago in the class: