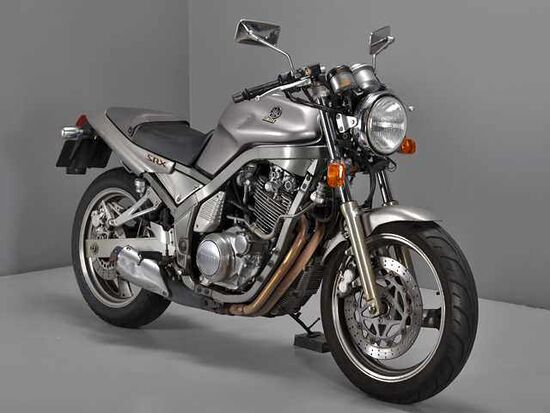 The Yamaha SRX 400 appeared in 1985 as an offshoot of the retro series Yamaha SR400 and was intended for a sportier ride. Unlike the SR, the SRX received a different cylinder head (4 valves), disc brakes, alloy wheels, a sportier design and ergonomics. The first versions of the model were called “Yamaha SRX-4”.

In 1988, the model was restyled with new wheels, an enlarged brake disc and a 4-piston caliper. The model is still called the Yamaha SRX-4.

In 1991, the model undergoes its last restyling, receiving an updated appearance, a new front fork, a new rear suspension (monoshock instead of a double shock absorber, 9 steps of preload adjustment instead of 5), new 17 'wheels, a reduced fuel tank (14 liters instead of 15 l), a fully transistor ignition system (instead of CDI) and an electric starter (previous versions were equipped only with a "kick"). This generation changes its name to - Yamaha SRX400.

The main feature of the Yamaha SRX400 is the 399cc, 1-cylinder, air-cooled engine producing 33 hp. power and 34 Nm of torque. There was also an export modification of the Yamaha SRX600, which had a larger engine and some other differences. The SRX400 was intended for the Japanese domestic market only.

1996 was the last year of production of the Yamaha SRX 400, after which it finally left the market and did not receive further development.

The main competitors of the Yamaha SRX 400 in the class: