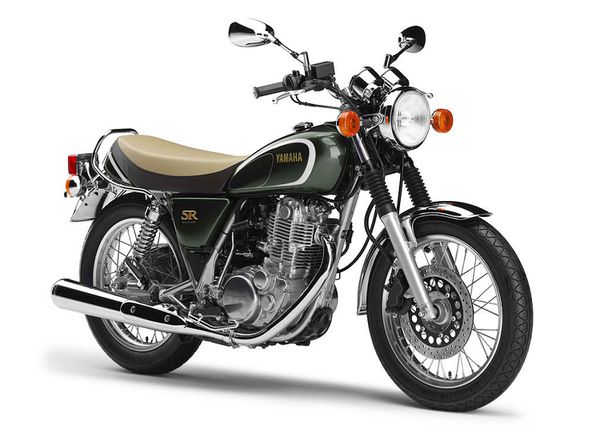 Yamaha SR400 begins its history in 1978 and is produced to the present day.

The main reason for the appearance of this model was the desire of Yamaha to present to the market the simplest retro classic in the usual forms and without any modern technologies unacceptable for motorcycles of this class. As a result, the Yamaha SR 400 was born, equipped with a simple 1-cylinder air-cooled engine producing 27 hp. power and 29 Nm of torque. It is also noteworthy that the motorcycle was not equipped with an electric starter, but was started by means of a traditional kick starter. However, to make starting easier, Yamaha brought a standard decompressor and a viewing window on the right engine cover to the left control panel, making it easier to find the optimal position of the piston in the cylinder.

Key features of the Yamaha SR400 include a simple steel frame, dry sump (oil was in the frame), simple suspension in the form of a telescopic fork in the front and a double shock absorber in the rear, a rear drum brake and 18 'spoked wheels.

The Yamaha SR400 is rarely used in stock condition and is often the basis for building custom motorcycles - mostly cafe racers. That is why it is difficult to find a motorcycle in a completely regular version. In the Russian Federation, this model is quite rare, but in Japan it is in great demand, therefore, the Yamaha SR400 is presented in large quantities at Japanese auctions. Since 2014, the model has been available in the North American and European markets.

The "big brother" of the model is Yamaha SR500.

The main competitors of the Yamaha SR400 in the class: