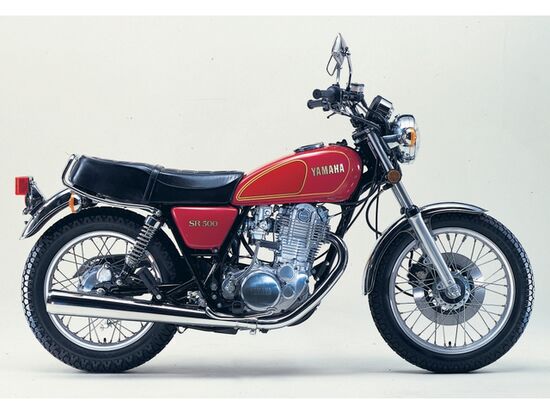 The Yamaha SR500 appeared in 1978 at the same time as the Yamaha SR400 and differed from it only with a slightly larger engine, taken from the Yamaha XT500 enduro model. Initially, the Yamaha SR500 was exclusively targeted at overseas markets in Asia, North America, Europe and Oceania, but since 1984 the model has been available in Japan as well.

The reason for the emergence of the Yamaha SR500 was the desire of Yamaha to produce a simple classic and archaic motorcycle without the use of modern parts and technologies - a classic steel frame, a simple air 1-cylinder engine, classic suspensions, 18-radius spoked wheels at the rear and 19 at the front, and also drum brakes. By the way, at first the concept of "retro motorcycle" was not entirely clear to motorcycle manufacturers and buyers of this technology, because it was the 70s and 80s of the last century and most of the classic motorcycles looked similar to the Yamaha SR500. In addition, the first versions of the model, intended for the American market, had disc brakes at the front and rear, and alloy wheels, which was a modern solution in those years. Realizing this, Yamaha over time began to move away from the use of advanced technologies, preferring classic solutions - for example, the rear (and then the front) disc brakes soon gave way to a drum, and alloy wheels were replaced by spoked rims.

Like the younger version ( Yamaha SR400), the Yamaha SR500 is very often used to build custom projects - cafe racers and scramblers. Stock versions are quite rare in the Russian Federation and are mainly brought from auctions in Japan.