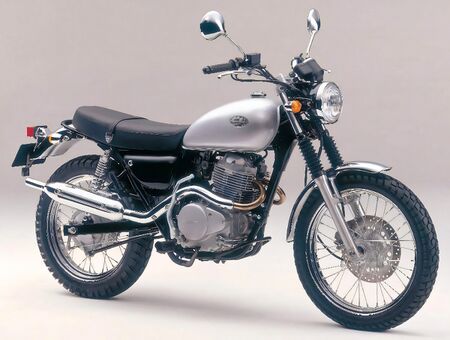 The model of the retro-classic motorcycle Honda CL 400 was presented in 1997 at the Tokyo Motor Show, and went into series since September 23, 1998. The concept of the model was quite simple - to present to the market a motorcycle with classic shapes, perfect for both city and country trips. The model was based on a 1-cylinder 4-stroke air-cooled engine with a volume of 397 cc. see, issuing 29 hp. power and 34 Nm of torque. The engine was developed in 1985 and subsequently put on the enduro Honda XR 400.

Of the features of the Honda CL 400, it should be noted a steel half-duplex frame, a kick starter, a dry sump lubrication system, classic suspensions in the form of a conventional telescopic fork and double shock absorber, rear drum brakes, a 5-speed gearbox and large spoked wheels with 19 'and 18' ...

The Honda CL 400 was designed primarily for the Japanese market, which is why this motorcycle is widely represented at Japanese auctions. The model was produced until 2001, after which it was discontinued and replaced by the Honda CB400SS. Like most other retro models, the Honda CL 400 is actively used as the basis for building custom.

The main competitors of the Honda CL 400 in the class: