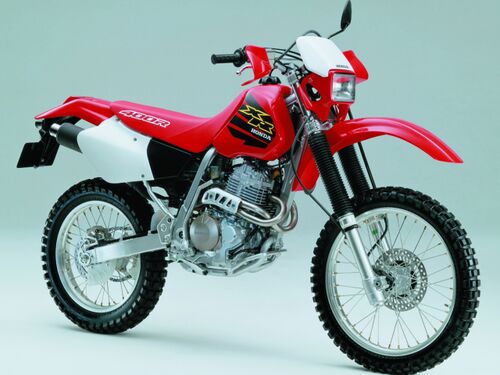 Honda XR 400 appeared in 1996 and was focused on export - North America, Europe, Australia. The motorcycle was a typical soft enduro class suitable for use on public roads, with soft long travel suspensions and a derated engine.

The Honda XR400R is based on a 1-cylinder 4-stroke air-cooled 397 cc engine producing 34 hp. power and 33 Nm of torque. The motor has 4 radial valves (RFVC system - Radial Four Valve Combustion Chamber) and one camshaft.

2004 was the last year of production of the Honda XR400R, after which it was replaced by a new series - Honda CRF450. Also, since 2005 in the domestic Japanese market, based on the XR400R, a factory motard model has appeared - the Honda XR400 Motard. This motorcycle has received a number of technical differences:

The Honda XR400 Motard model existed until 2008 inclusive, after which it also left the market and did not receive further development.

The main competitors of the Honda XR400 in the class: