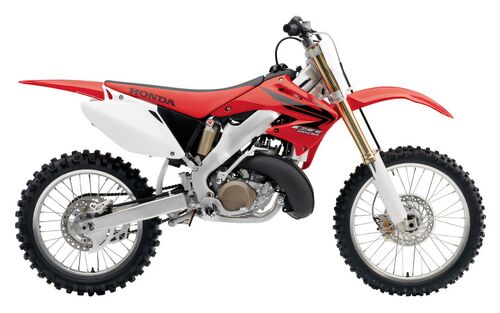 The Honda CR 250 R cross-country motorcycle model begins its history since 1973 - it was in this year that the model entered the series and became available to consumers. Since 1989, the model has been equipped with an inverted fork, and since 1997 with an aluminum frame. In our review, we will consider exactly the models from 1997, since they are of the greatest interest to consumers.

In 1997, the Honda CR250R, in addition to the aluminum frame, received a new generator stator and a new Keihin carburetor with an electronic Power Jet system (to improve the mixture). By 1999, the Power Jet system was abandoned.

In 2000, the model undergoes another restyling, receiving a thinner and lighter frame, a new carburetor and a switch (limited the maximum speed to 8000 rpm). In 2001, the switch was changed again, increasing the maximum speed by 500 rpm and, accordingly, the maximum power by 2 hp.

In 2002, the Honda CR250R undergoes major changes. The new version of the motorcycle finally loses the interchangeability of parts with earlier versions, getting an updated appearance, a new Mikuni TMX carburetor (with a TPS throttle position sensor), a new engine with an electronic power valve control system, a new generation of the frame.

2007 was the last year of production of the model, after which it finally left the market and did not receive further development. Instead of two-stroke models, it was decided to offer the market high-powered 4-stroke models.

The main competitors of the Honda CR250R in the class: