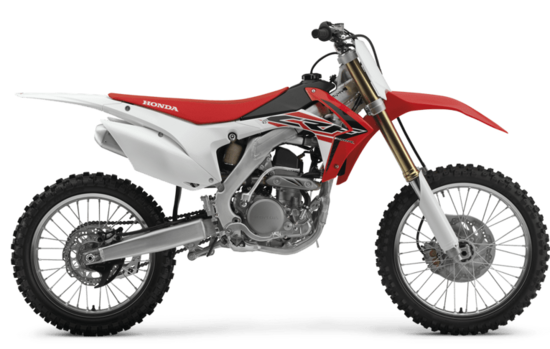 The Honda CRF250R and Honda CRF250X models were targeted at the markets of Europe, North America, Australia and Japan (the CRF250X has been available there since the end of 2010).

The Honda CRF250 series is based on a 1-cylinder 4-stroke liquid-cooled engine, with a volume of about 250 cm³, with one camshaft and 4 valves. The engine modification for the crossover version of the Honda CRF250R featured more boost, exhaust system and constant change every few years. The engine for the Honda CRF250X was largely unchanged from 2004 to 2017.

The first major facelift was the Honda CRF250R in 2009. The motorcycle received a new version of the engine with an increased compression ratio and an injection power system. The engine has also been bolstered with stiffer valve springs and stronger aluminum piston material. The frame has become thinner and lighter, the wheelbase and swingarm length have been increased, and the diameter of the fork stays has been increased to 48 mm.

In 2010, as mentioned above, the Honda CRF250X model became officially available in the Japanese market. Unlike the motocross version, the CRF250X did not undergo major changes and was still equipped with a carburetor power system.

In 2012, a new budget model appears Honda CRF250L, which, although it has a similar name, does not belong to the full CRF line.

By August 2013, Honda introduced an updated version of the Honda CRF250R crossover model. The motorcycle received a new generation of frame and swingarm. To improve weight distribution, the exhaust has become double. The suspensions remain the same, but have changed their characteristics for the new frame and swingarm. New generation of the engine - increased compression ratio, redesigned piston and combustion chamber, new 2-stage fuel injection system 2 PGM-FI.

The main competitors of the Honda CRF250R (cross) in the class:

The main competitors of the Honda CRF250X (enduro) in the class: