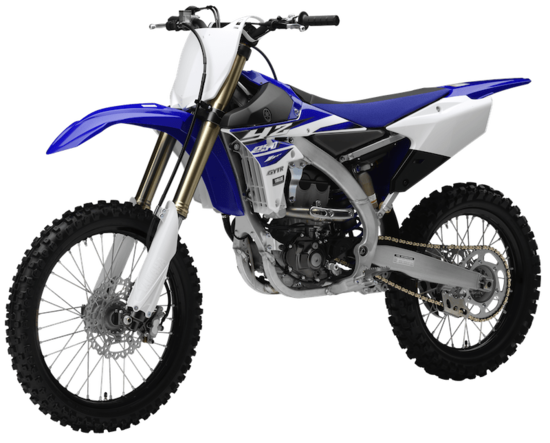 The Yamaha YZ250F was introduced in 2001 as a 4-stroke crossover model to replace the 2-stroke Yamaha YZ250. It should be noted that this step was taken by the entire Japanese "four" motorcycle manufacturers, with the only difference that 2-stroke cross-country motorcycles from Yamaha were so successful that they continue to be produced in parallel with 4-stroke and even compete in the same racing class.

In 2006, the model undergoes a major update, the main innovation of which was the transition from steel to aluminum frame. From that moment on, the YZ250F model became a full-fledged player in the market of cross-country models with an engine capacity of up to 250 cc.

In 2008, the model receives a new engine that has been further optimized to slightly increase maximum power and torque characteristics.

For 2010, the Yamaha YZ250F gets a new fork and relocates the engine in the frame to lower the center of gravity and improve handling. Overall optimization allowed achieving a record curb weight of 102 kg.

2014 marked the next generation of the Yamaha YZ250F. The motorcycle received a new front fork, a new engine with a fuel injection system and an increased compression ratio (from 12.5 to 13.5), a 4-valve cylinder head (instead of a 5-valve). In 2016, the model received a new front brake disc (diameter increased from 250 to 270 mm).

For 2019, Yamaha is revamping the YZ250F with a new engine (compression ratio increased from 13.5 to 13.8), a new rear shock absorber (settings changed) and an electric starter.

Based on the Yamaha YZ250F, the enduro series Yamaha WR250 was built.