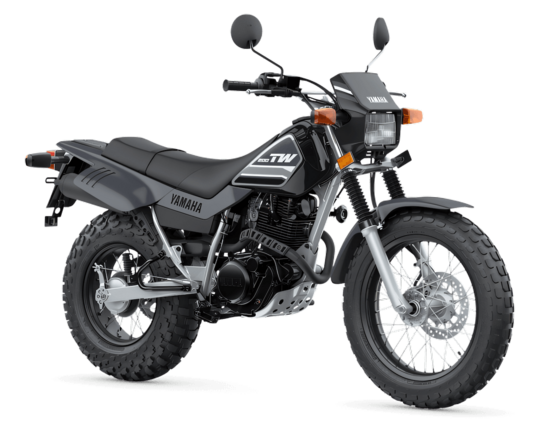 The Yamaha TW200 hit the Japanese and North American markets in 1987.

The North American versions were almost identical to the domestic Japanese versions, but were sold with a prefix in the name - Trailway. The TW200 positioned itself as a versatile off-road motorcycle designed for cross-country riding, however, more road tires began to be installed from the 1990s, and the model could be used for city riding.

In 1998, in parallel with the regular version, the Yamaha TW200E version began to be offered in the domestic Japanese market, which received the scrambler style, more precisely the classic round headlight, and since 1999 this version has completely replaced the simple TW200. Since 2000, the Japanese TW200E received a front disc brake (instead of a drum), and in 2001 it was finally discontinued and in 2002 was replaced by Yamaha TW225.

Export versions Yamaha TW200 (Trailway) ' and Yamaha TW200E (this name was used for European and Canadian versions, and unlike Japanese, had a traditional rectangular headlight, that is, they were identical to American and Japanese TW200) were produced unchanged until 2000 inclusive, after which they underwent minor changes - in particular, the front drum brake was replaced with a disc brake (as on the Japanese TW200E, 2000-2001), and the Trailway prefix in the name of the American versions was removed.

The Yamaha TW200 / E is currently available in the US and Canadian markets.