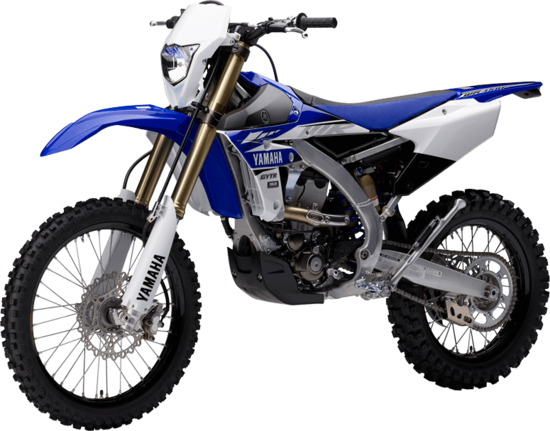 The Yamaha WR450F was introduced in late 2002, replacing the Yamaha WR426F. The motorcycle is built on the basis of the cross model Yamaha YZ450F, differing from it in the presence of lighting equipment, engine adjustments (derated, increased flywheel, changed exhaust system, other ignition settings), chassis geometry.

In 2005, the motorcycle gets a new exhaust system.

In 2007, the Yamaha WR450F receives an aluminum frame, a redesigned plastic, and a new generation of the engine - a new balancer, camshafts, and a modified cylinder head.

Since 2012, the Yamaha WR450F has received fuel injection (instead of a carburetor), a digital transistor ignition system, a new KYB SSS (Speed-Sensitive System) front fork and a changed engine position (the engine was turned back, which slightly shifted the center of gravity and improved handling characteristics).

In 2016, the next update of the Yamaha WR450F was presented. the bike received a new motor with 4 valves instead of 5, the characteristics of the suspensions changed, the diameter of the front brake disc was increased from 250 to 270 mm.

In 2019, the modification receives a slightly modified headlamp design, a new engine with an increased compression ratio (12.8 versus 12.5), an increased capacity of the battery tank (8.3 versus 7.6 liters), and a different suspension geometry.