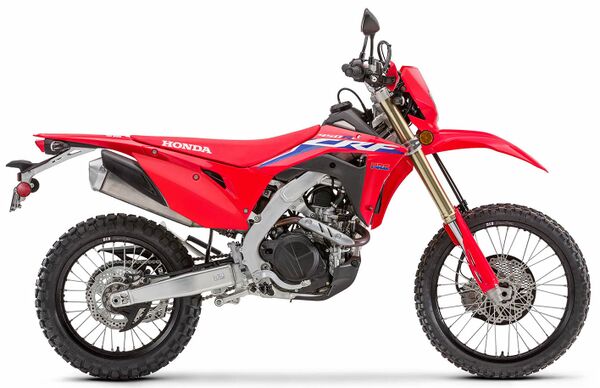 In 2005, the enduro Honda CRF450X was added to the CRF 450 range. Built on the basis of the frame and engine from the CRF450R, it differed from it in the engine settings (less forced, more torque at the bottom), suspensions, exhaust system, the presence of a headlight, an electric starter, an 18 'rear wheel and an increased fuel tank capacity. This model was intended to replace the obsolete Honda XR400 and to make a more hard-enduro bias. Unlike the CRF450R, the enduro version of the Honda CRF450X was not officially marketed in the Japanese market.

In September 2008 (model year 2009), the Honda CRF450R undergoes its first major facelift. The motorcycle is equipped with a new engine, which now weighs almost 2 kg lighter. In addition, electronic fuel injection (PGM-FI), a new intake system and a new titanium exhaust system have been implemented in place of the carburetor. The frame has become more rigid, the geometry of the chassis has changed (in particular, the swingarm). The pendants have changed their settings.

By August 2012, Honda is again updating the crossover version of the Honda CRF450R, offering the market a new version of the 2013 model year. The motorcycle is equipped with a new generation frame and a dual exhaust system (to achieve optimal motorcycle weight distribution). Changed and reconfigured suspensions - the front fork becomes pneumatic and reduces weight by 800 grams. The front suspension can now be quickly and easily adjusted by changing the air pressure in it. New engine - increased valves, increased compression ratio, new settings for the injection system.

In September 2016 (model year 2017), the Honda CRF450R undergoes another restyling, receiving a new engine (increased valve lift, new valve springs, a new shape of the combustion chamber, a new oil pump system, an increase in the diameter of the intake valves, an increase in the compression ratio). New electronic systems: HRC Launch Control, Engine Mode Select Button (EMSB). New Showa front suspension. New rear suspension settings. In the same year, the enduro modification of the Honda CRF450X is seriously updated. It changes its name to Honda CRF450RX and gets the same engine as the Honda CRF450R. Both models are now unified with each other, and differ only in the settings / geometry of the suspensions, mass-dimensional characteristics, fuel tank capacity, gear ratio of the main pair and the dimension of the wheels. The new Honda CRF450RX is also available in the Japanese domestic market.