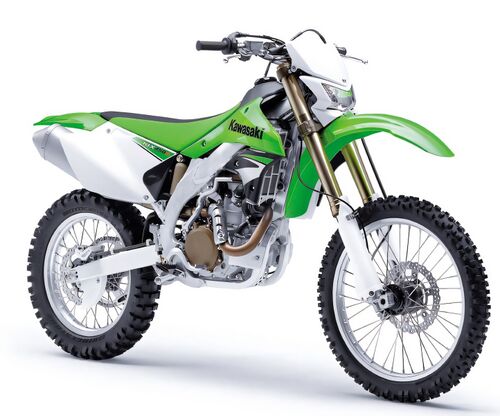 The Kawasaki KLX450R first appeared in late 2007 (2008 model year), based on the first generation Kawasaki KX450F motocross model. The motorcycle was targeted at the markets of North America, Europe, Japan and Australia.

Unlike the crossover Kawasaki KX450F, the Kawasaki KLX450R tweaks the engine and exhaust system to get more low-end torque and a smoother performance. In addition, the motorcycle was equipped with a headlight, 21 'and 18' wheels (in the crossover - 21 'and 19') and an electric starter.

Among the features of the KLX 450 model should be distinguished an aluminum half-duplex frame, long-travel adjustable suspensions in inverted forks with a diameter of 48 mm stays in front and a pendulum progressive (Uni-Trak) suspension with a mono-shock absorber at the rear, a carburetor power system, disc brakes, an 8 l fuel tank and 126 kg of curb weight.

As of 2019, the Kawasaki KLX450 is only available in select countries in Europe and Australia.