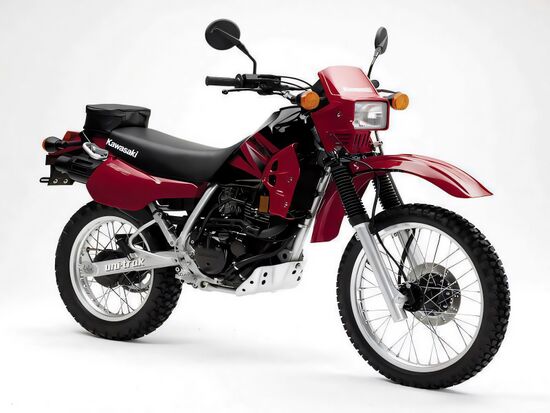 The Kawasaki KLR 250 enduro first appeared in 1978 in the North American market. At that time, the model was an archaic (by modern standards) motorcycle, with an air-cooled engine, a round headlight, drum brakes and a rear suspension in the form of two shock absorbers. This generation had the factory code - KL250-A.

In 1983, the model changes slightly, receiving the new factory designation KL250-C . This generation has a lot in common with the previous version.

In November 1984 (model year 1985), Kawasaki introduced the new generation KLR250 to the market under the new code “KL250-D”. This version is radically different from the previous ones - a new liquid-cooled engine, new suspensions, frame, headlight, plastic, front disc brake and more. It was this generation of Kawasaki KLR250 that gained the greatest popularity and was available not only in the USA and Canada, but also in many other countries - Japan, Europe, Australia, South Africa. This motorcycle was also actively used as a police version and for the needs of the army (special version).

Throughout the entire production period, from 1985 to 2005, the model practically did not change, but at the same time it enjoyed stable demand. Reliable and simple design, low price, increased fuel tank capacity (11 liters), soft long-travel suspensions and a 6-speed gearbox made the Kawasaki KLR 250 model extremely successful and suitable for use in any purpose - from off-road trips of the day to long motorcycle trips on the cross terrain.

The lineup of the Kawasaki KLR series:

The main competitors of the Kawasaki KLR 250 in the class: