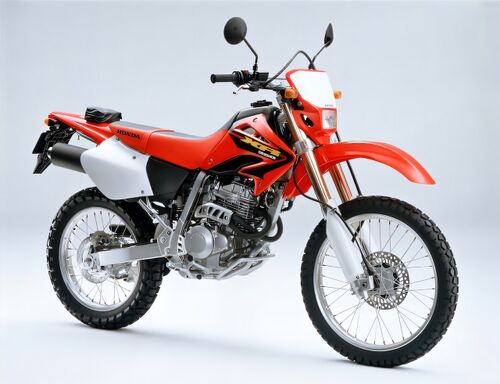 The Honda XR250R enduro model begins its history in 1981 - then it was a model built on an engine from the Honda XL250S. By 1984, the model received a new Radial Four Valve Chamber (RFVC) engine, and by 1986, one carburetor instead of two. In 1990, the Honda XR250R received a rear disc brake instead of a drum brake, and continued to be produced as such until 1995.

In January 1995, Honda announced a new generation Honda XR250R , which was originally only available in the Japanese market, but since 1996 has become available in foreign markets - North America, Europe, Australia. Simultaneously with this model, a modification was also presented - '' Honda XR250 Baja .

In 2003, the Honda XR250 Baja modification was discontinued, and the main version of the Honda XR250R for the Japanese market underwent restyling, receiving an inverted fork, an updated appearance and minor technical differences - improved engine airflow, CDI ignition received a digital block (optimized operation at low and medium speed), the ignition lock is now prepared for the installation of a standard alarm. In the same year, the company offers a new modification - Honda XR250 Motard . It was based on the XR250R and is only available in the domestic Japanese market.

The main competitors of the Honda XR250 in the class: