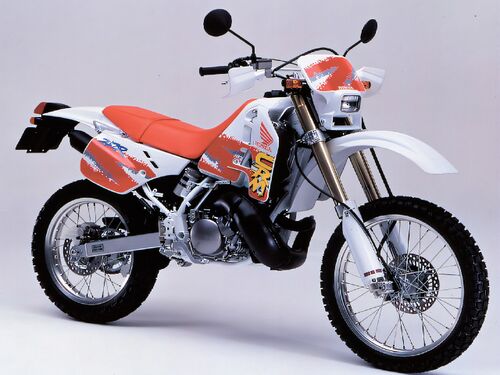 The Honda CRM 250 R enduro model appeared in 1989 as a simple two-stroke motorcycle aimed at the road. According to the classification, the Honda CRM250 belongs to the soft enduro class - soft suspension, balanced engine settings, low fuel consumption - all this makes the motorcycle ideal for leisurely driving on rough terrain, dirt roads and forests.

The first generation of the model, 1989-1990, featured a conventional fork and a maximum engine output of 37 hp. The engine was equipped with a balance shaft and power valves that altered the intake and exhaust sections for smoother thrust and optimized engine performance over the entire rev range. Foreign sources call this generation of the motorcycle - "MK1" ".

By March 1991, Honda introduced a new generation of Honda CRM250, dubbed MK2 by consumers. Instead of the usual 41 mm telescopic fork, the model gets an inverted fork with a 45 mm blade diameter and is adjustable. The rear shock absorber increases its travel from 280 mm to 300 mm. The frame structure is reinforced by thickening the tubes. The engine is equipped with a new PGM-RC power valve system that digitally controls the exhaust flow, depending on the engine speed. In addition, the model gets a new exhaust, an improved combustion chamber and an intake system - all changes were aimed at improving the performance of the engine in the low and mid-range zone. From this generation onwards, the maximum power is increased to 40 hp and the torque is increased from 33 to 36 Nm at the same operating speed. New, more advanced ignition system - PGM-DC-CDI. The compression ratio of the engine is increased - from 6.2 to 6.4.

In early 1993, the model received minor changes regarding the shape of the brake and clutch levers, clutch cable (now made of stainless steel), wheels (now slightly lighter), color scheme (now the wings and saddle are the same color).

By the beginning of 1994, the Honda CRM250R model was updated again - the generation MK3. The exhaust system is modified, which increases the torque characteristic from 36 to 39 Nm. The compression ratio rises again - from 6.4 to 6.7. The gear ratio of the 1st and 2nd gears changes (they become longer). The system for turning on the light has been changed (to improve the starting characteristics, the light is turned on only after the engine reaches idle speed). The oil tank has been moved to the rear of the cylinder (to optimize weight distribution and improve serviceability). The design of the rear suspension has been changed (the diameter of the shock absorber has been increased from 44 to 46 mm), the remote reservoir has been moved. The fuel tank capacity has been increased from 10 liters to 11 liters.

Since January 1997, Honda has offered the new and latest generation of the CRM250 model. The model changes its name - Honda CRM250AR. The motorcycle is equipped with a new larger engine (246 → 249 cm³) and a new carburetor - fuel efficiency increases by 32%, and CO2 emissions are reduced by 50%. The engine becomes even more flexible. The rigidity of the frame and chassis has been increased (the suspension configuration has been optimized for a more comfortable ride on bad roads). The power of the headlight is increased (35 / 36.5W → 55 / 60W). New unique motorcycle skin and AR stickers.

The main principle of AR technology is to improve the combustion of the fuel mixture in all engine operating modes, especially at moments of minimum load (small opening of the throttle), when part of the fuel simply does not have time to burn. AR technology involves the use of the phenomenon of self-ignition (when the flash of the fuel-air mixture occurs without the participation of a spark plug), I control this process with a special ARC valve installed at the outlet. This valve changes the ignition timing, controlling the remaining unburned mixture in the cylinder and the initial pressure. As a result, the use of this system significantly increases fuel economy and engine efficiency, and reduces harmful emissions.

1999 was the last year of production of the Honda CRM250, after which it finally left the market and did not receive further development. Tightening environmental standards forced motorcycle manufacturers to abandon civil (non-sports) motorcycles with 2-stroke engines, even though the technologies of that time already made it possible to build 2-stroke engines with a long resource, good fuel efficiency, environmental friendliness and, at the same time , simplicity and high characteristics that are not inferior to high-powered 4-stroke versions (which had a small resource and high maintenance costs).

The main competitors of the Honda CRM250 in the class: