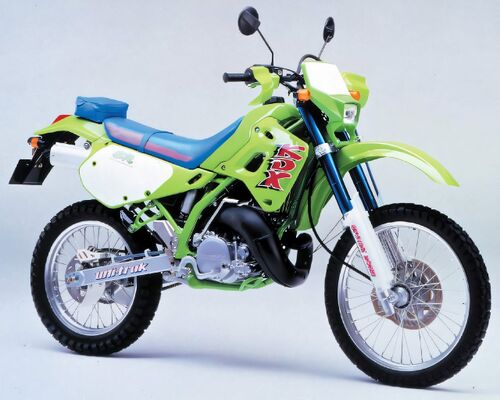 The enduro model Kawasaki KDX250 dates back to 1980, when the first generation of a motorcycle was introduced to the market, which was only available in the United States. That generation, by today's standards, was pretty archaic - an air-cooled 2-stroke engine, drum brakes, and crude forms of plastics. The factory model code is KDX250-A.

The 1981 Kawasaki KDX250 undergoes minor revisions with turn signals and a new plastic design. The factory model code is KDX250-B. 1984 was the last year of production.

In 1991, Kawasaki resumed production of the KDX250, seriously updating it both externally and technically - a new liquid-cooled engine, disc brakes, an inverted fork. From this year, the model became available not only in the North American market, but also in Europe, Australia and Japan. Now 3 modifications of the motorcycle were offered:

1995 was the last year of production of the Kawasaki KDX 250, after which it finally left the market and did not receive further development.

The main competitors of the Kawasaki KDX 250 in the class: