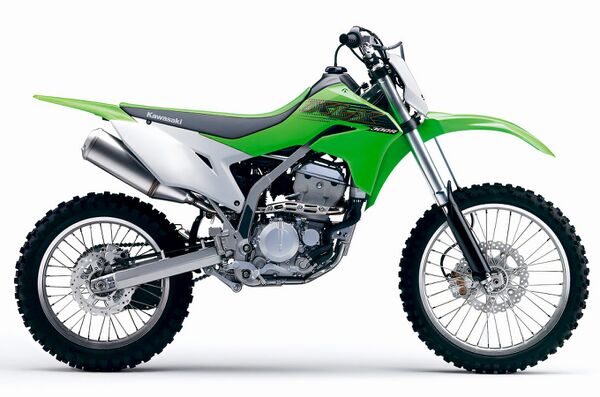 The Kawasaki KLX300 '' appeared in 1996 in the domestic Japanese market, and a year later became available in Europe and North America. The full model name is Kawasaki KLX300R. The factory code is KLX300-A.

In 1997, the European market began to offer a modification under the factory code "KLX300-B", which was positioned as a "road" version with a full-fledged dashboard (the basic version had only a mileage counter), mirrors and turn signals. It existed until 1999 in the market of some European countries.

The Kawasaki KLX 300 is based on a 1-cylinder, 4-stroke, liquid-cooled 292 cc engine with 4-valves and two camshafts (DOHC), producing up to 33 hp of power and 28 Nm of torque. The frame of the motorcycle is a tubular steel structure. Suspensions are adjustable: front 43mm inverted fork (adjustable in compression), rear progressive Uni-Trak swingarm with fully adjustable shock absorber.

Since 2004, the model has left the European market and is offered mainly in the American market. 2007 was the last year of production.

Since 2020, Kawasaki has introduced a new generation of the KLX300, factory code KLX300-C. The new model received an updated appearance, an injection power system, an electric starter (the previous generation was equipped only with a kick), revised suspension settings and an updated braking system. Currently, this version is only available in the North American and Australian markets.