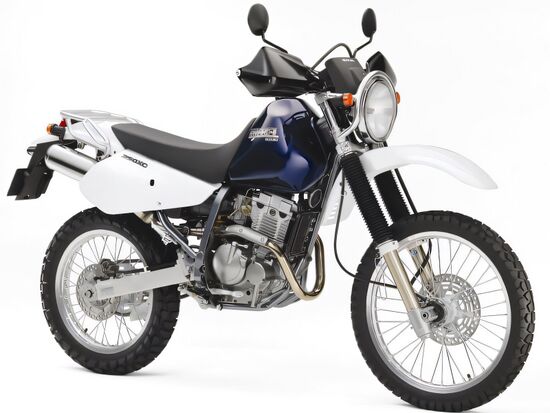 Suzuki Djebel 250 was first introduced in November 1992 and was produced until 2008 inclusive. The first versions of the motorcycle (until 1996) were a modification of the Suzuki DR250S model, differing from it with a conventional telescopic fork and a round headlight. Subsequently (since 1996), the Djebel 250 modification was separated into a separate model `` Suzuki Djebel 250XC , using Suzuki DR250R as the base model and receiving a 17 liter fuel tank.

Of the key features of the Suzuki Djebel 250 XC, a steel frame should be distinguished, adjustable in compression and rebound suspension in the form of a conventional telescopic fork in the front and rear monoshock, full disc brakes, a 6-speed gearbox, a 17-liter fuel tank, the availability of versions with GPS (Suzuki Djebel 250 GPSver.) And 118 kg dry matter.

The Suzuki Djebel 250XC was intended only for the domestic Japanese market and was not officially exported anywhere. 2008 was the last year of production of the Suzuki Djebel 250. Despite the huge popularity of the motorcycle, the company was forced to stop development of the model due to the introduction of more stringent environmental regulations, which the Djebel 250 air-oil engine did not meet. Nevertheless, the model is still in high demand, including in the Russian Federation, importing motorcycles from Japanese auctions.

The "younger brother" of the model is Suzuki Djebel 200.