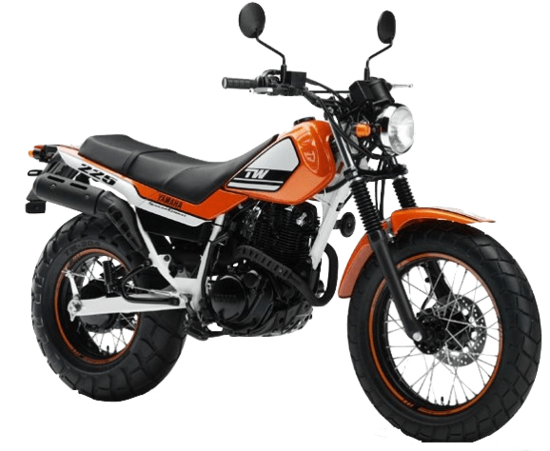 The Yamaha TW 225 was introduced in 2002 as a replacement for the Yamaha TW 200 in the domestic Japanese market (the TW200 was still available in export markets such as Europe and North America). The full model name is Yamaha TW225E. The main differences between Yamaha TW 225 and TW200 are in the engine (volume 223 cm³ versus 196 cm³), rear brake drum dimensions (110 → 130 mm) and insignificantly in overall dimensions. In all other respects, the Yamaha TW225E is identical to the Japanese version of the TW200E 2000-2001.

The Yamaha TW 225 was based on a 1-cylinder 4-stroke 2-valve engine (from the Yamaha Serow 225) air-cooled 223 cc engine. see, issuing 18 hp. power and 18 Nm of torque. The engine is powered by a carburetor and has a simple and reliable design.

In its class, the Yamaha TW 225 is similar to enduro motorcycles, but it also has the features of road bikes - a full-fledged dashboard, round headlight, small wheels. According to one of the classifications, the model can be attributed to scramblers, while Yamaha itself classifies the motorcycle as Adventure Touring / Dual Sport. The model is primarily intended for off-road use - driving over rough terrain and difficult terrain. The motorcycle is not intended for sporting events, jumping and super-hard use such as classic enduro-cross models. His element is overcoming off-road and dirt roads.

The Yamaha TW 225 model existed on the market until 2007 inclusive, after which it was discontinued and did not receive further development. Special mention should be made of the Yamaha TW225E 20th Anniversary Special Edition, which was offered in 2007 in exclusive colors to celebrate the 20th anniversary of the TW Series. Currently, the model is widely represented at Japanese auctions, and is also found in neighboring Asian countries.

The main competitors of Yamaha TW225 in the class: