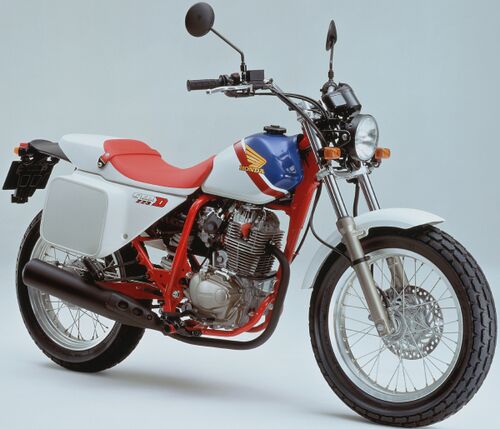 The Honda FTR 223 light road bike was first introduced in September 2000 and was produced until 2016. The motorcycle is a successor of the FTR (Flat Track Racer) series, namely the Honda FTR 250, produced between 1986 and 1989. However, unlike her, the new version of the Honda FTR 223 received a more civilian design, making the motorcycle more suitable for use in the city and on dirt roads. The model was based on the base from the Honda XR200R enduro.

The Honda FTR 223 is powered by a 223cc, 1-cylinder, 4-stroke, air-cooled engine. see, issuing 19 hp. power and 21 Nm of torque. The maximum performance of the motor is reached at 6000-7000 rpm. The use of a 2-valve cylinder head and certain engine settings made it possible to make the motorcycle high-torque at "low" and medium revs, which increased the comfort of using the motorcycle in the city and on light off-road.

The Honda FTR 223 has a simple and reliable design: a classic steel frame, front disc brakes, drum rear, a conventional telescopic fork in the front and a monoshock at the rear, 18 spoked wheels of equal width.

Due to its reliability, light weight, economy and simplicity, the motorcycle is actively used for training beginners in motorcycle schools in many countries.

The FTR 223 common base is used on the retro classic Honda CB223S and the Honda SL230 enduro.

The main competitors of the Honda FTR 223 in the class: