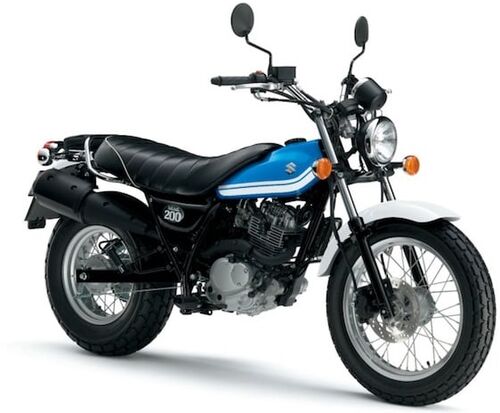 Suzuki RV200 VanVan was first introduced in 2002, although the VanVan series begins its history in the 70s of the last century. The model is still in production and is officially sold in Japan, North America and several other countries around the world. In the Japanese market, the model is known under the name - "" Suzuki VanVan 200 "".

The Suzuki VanVan 200 model is distinguished by the simplest archaic layout - a classic steel frame, suspension in the form of a conventional telescopic fork and a central rear monoshock, front and rear disc brakes, 18 'and 14' spoked wheels. Since the bike positions itself as an SUV, the front wheel has a larger diameter and the rear wheel is 180 mm wide.

Currently, the Suzuki VanVan 200 model is sold in a large number of countries at a price of $ 4500, which makes it very affordable for residents of developed countries as a daily transport in regions with poor roads or fans of classic off-road scramblers.

The main competitors of Suzuki RV200 VanVan in the class: